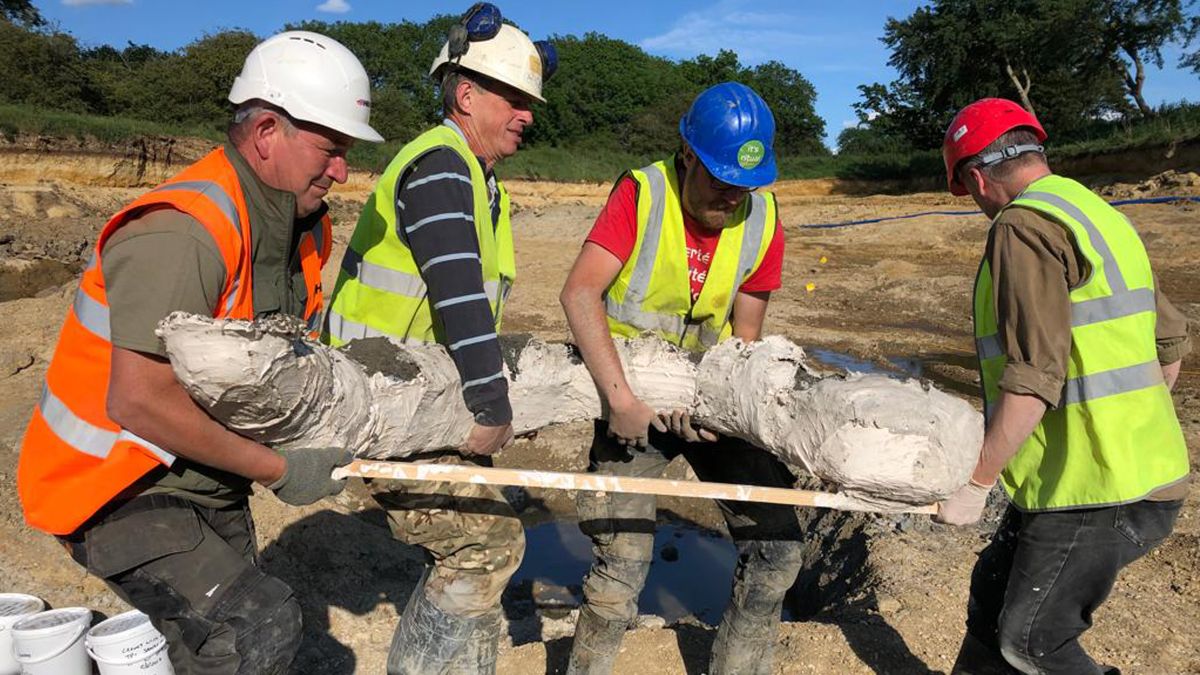 Researchers have unearthed a mammoth “graveyard” filled with the bony remains of five individuals — an infant, two juveniles and two adults — that died during the last ice age at what is now a quarry in Swindon, a town in southwest England.

Alongside the mammoth remains, researchers discovered stone tools crafted by Neanderthals, including a hand ax and small flint tools known as scrapers, which were used to clean fresh animal hides, according to DigVentures, the crowdsourced archaeological outfit in the U.K. that led the excavation. However, the team has yet to analyze the mammoth bones to determine whether they have Neanderthal tool marks on them.

“Finding mammoth bones is always extraordinary, but finding ones that are so old and well preserved, and in such close proximity to Neanderthal stone tools is exceptional,” Lisa Westcott Wilkins, the co-founder of DigVentures, said in a statement.

Related: Photos: See the Ancient Faces of a Man-Bun Wearing Bloke and a Neanderthal woman

Two amateur fossil hunters, Sally and Neville Hollingworth, discovered the graveyard and Neanderthal tools. Soon after, DigVentures organized two field seasons in 2019 and 2020 to excavate the site. The archaeologist-led work uncovered more ice age remnants, including delicate beetle wings, fragile freshwater snail shells and mammoth remains, such as tusks, leg bones, ribs and vertebrae belonging to a species of Steppe mammoth, a group whose descendants include the woolly mammoth. Although early Steppe mammoths stood up to 13.1 feet (4 meters) high at the shoulders, the five mammoth individuals at the graveyard were small, an indication that the species might have shrunk during an especially cold spell during the ice age, according to DigVentures.

Researchers dated the site to between 220,000 and 210,000 years ago, toward the end of an interglacial, or warm period, when Neanderthals still lived in Britain. Once temperatures dropped, however, the Neanderthals moved farther south.

Going forward, the team plans to figure out why so many mammoths died at one spot and whether Neanderthals hunted the beasts or scavenged their remains. Some previously found prehistoric evidence suggests Neanderthals stalked mammoths and other large pachyderms. For instance, Neanderthal footprints were found at a 100,000-year-old “nursery” for straight-tusked elephants (Palaeoloxodon antiquus) in southern Spain, Live Science previously reported.

The new graveyard findings are described in the new BBC documentary “Attenborough and the Mammoth Graveyard,” with Sir David Attenborough and Ben Garrod, an evolutionary biologist at the University of East Anglia in the United Kingdom, who joined DigVentures on site to film the excavations. The show airs at 8 p.m. GMT on Dec. 30 on BBC One.

“The findings have enormous value for understanding the human occupation of Britain, and the delicate environmental evidence recovered will also help us understand it in the context of past climate change,” Duncan Wilson, the chief executive of Historic England, a British historical preservation body, said in a statement. “Through these finds and the research that will follow, we look forward to further light being shed on life in Britain 200,000 years ago.”

The work was funded by Historic England and supported by Keith Wilkinson of ARCA at the University of Winchester, the site’s landowners Hills Group Quarry Products and a wider specialist team from several U.K. research institutions.