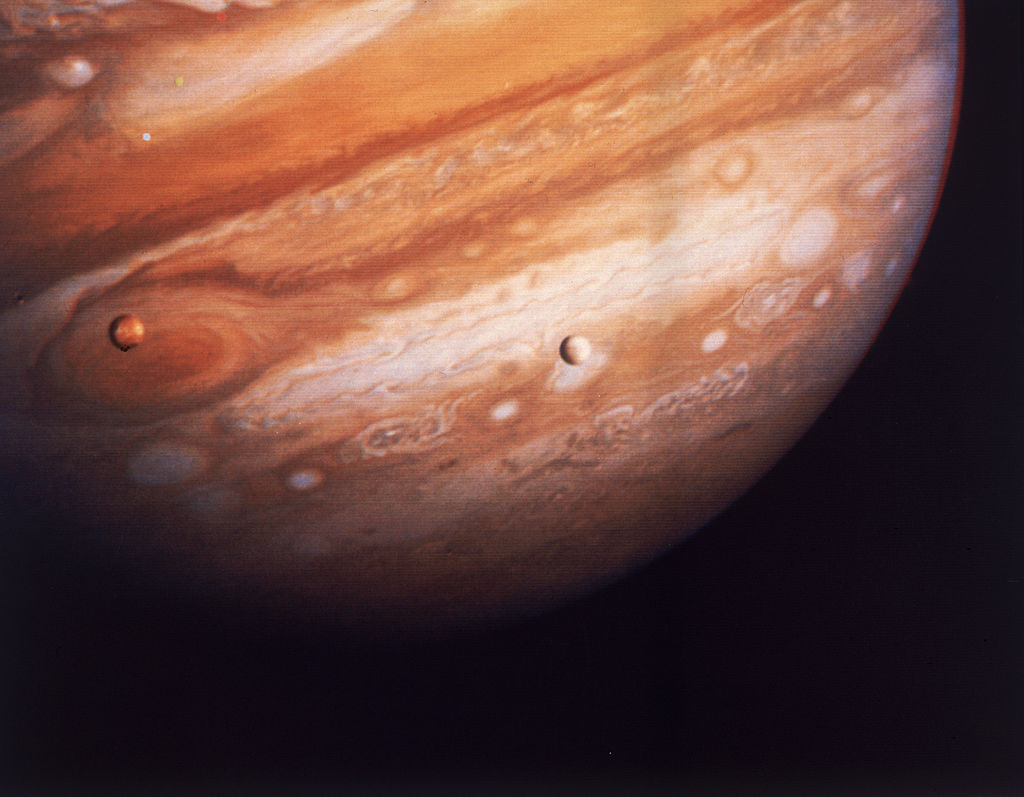 Jupiter is an extraordinary planet with qualities that almost defy comprehension.

At more than 300 times the mass of Earth, Jupiter is easily the largest planet in the solar system—a giant ball of mostly hydrogen and helium. It is also home to the red spot, which is a powerful 400mph swirling storm larger than Earth itself.

Jupiter has 53 named moons and another 26 awaiting official names, according to NASA. Among them are the four Galilean moons—Io, Europa, Gany- mede, and Callisto—grouped at approximately equal distances from the surface.

1. Europa Is ‘Most Likely’ Candidate To Harbor Life

Europa is a frozen, icy world world but many scientists are confident that below the frozen surface lies a salt-water ocean and a rocky seafloor.

NASA is intrigued enough to send an unmanned spacecraft to Europa in October 2024.

Dr. Curt Niebur, lead scientist for Outer Planet Science in NASA’s Planetary Science Division, told Newsweek the probe’s mission is to help answer: “Does Europa have all the conditions all the ingredients such that it could be habitable, that life could exist?'”

“If we find bacteria on Europa, or Mars or elsewhere, there’s likely going to be intelligent life somewhere in the vast universe,” he added.

Europa is not the only one of Jupiter’s moons with the potential to harbor alien life, with Enceladus and Callisto also of interest to scientists.

But Dr. Niebur added Europa is the “most likely place” humans might find conditions that could support life beyond Earth. And, oceanographers tell him: “‘Curt, if it’s got all this stuff, the life’s there, trust us.”

“Because wherever we look in Earth’s oceans, for the past 200 years, when we’ve said, ‘this is a barren desert life doesn’t exist.’ It’s always there. If you’ve got the ingredients, it’s there,” he added.

2. Ganymede Has a Protective Magnetosphere

Ganymede is the largest and most massive of the solar system’s moons. It also has something very special: a protective shield, much like Earth’s.

Earth’s molten metal core produces a magnetic field, which shield’s the planet from the sun’s radiation. And there is evidence Europa also has this layer of liquid rock.

Roger Clark, senior scientist at the Planetary Science Institute, says cracks on Europa are comparable with those on frozen lakes on Earth but “on a huge scale.”

“The ice on Europa shows shifting plates similar to plate tectonics on Earth, only it is ice floating on an ocean of liquid water compared to rock floating on magma on the Earth.”

This protective layer could make Ganymede “a great destination for humans to live,” according to Dr. Niebur.

“It’s the only moon in the solar system that has a magnetosphere. So if you are living on Ganymede, that magnetosphere is protecting you from the radiation that astronauts experience in space.

“So Ganymede with all that ice, and with the other things that has on it, and with the real estate and with the magnetosphere makes it a very basic, very attractive place for humans to live one day.”

Io is the solar system’s most volcanically active world.

Hao Cao, a research associate in Harvard’s Department of Earth and Planetary Sciences, said Io’s volcanos are “much more powerful” than those on present-day Earth, powered tidal heating.

She told Newsweek: “The gas from Io’s volcanoes is the dominant source of plasma (ionized gas) that fills Jupiter’s magnetosphere, which extends many millions of km away from Jupiter on the dayside and possibly to Saturn’s orbit on the nightside .”

4. Callisto Also Has Likely Has a Sub-Surface Ocean

Callisto, or Jupiter IV, is the second-largest Jovean moon, after Ganymede, and like its sibling, Callisto may also have something special going on under its surface.

Dr. Niebur believes Callisto has another attraction other than being “of particular interest to those searching for alien life.”

He said: “If you want to study what old barren, kind of dead, surfaces are, Calisto is the place to go—the moon is the further-most distance [from Jupiter]. Its surface is 4 billion years old.

5. They Formed Via Processes Different To Earth’s Moon

The major moons of Jupiter are believed to have formed from a circumplanetary disk of gas and solids around the proto-Jupiter.

In contrast: “The Earth’s moon is believed to have formed from a giant impact between the pro-Earth and a Mars-sized planet.”

6. Ganymede Is Bigger Than the Planet Mercury

Dr. Niebur believes the giant dimensions of Jupiter’s moons could be explained by the planet’s own gargantuan size.

“Moons are common in the solar system,” he said. “There’s hundreds of them. But large moons are not that common. And by large moons I mean, moons the size of Earth’s moon and larger.

“I mean Ganymede is bigger than the planet Mercury. Ganymede is only called a moon because it orbits Jupiter. If it weren’t orbiting Jupiter, it would be a planet.

“And Europa is the size of Earth’s moon. So the question really is, why does Jupiter have so many big moons?

“And we’re not sure what the answer to that is? A big part of the answer is probably very simple. Jupiter is the biggest planet by far, it pulled in a lot of stuff.”