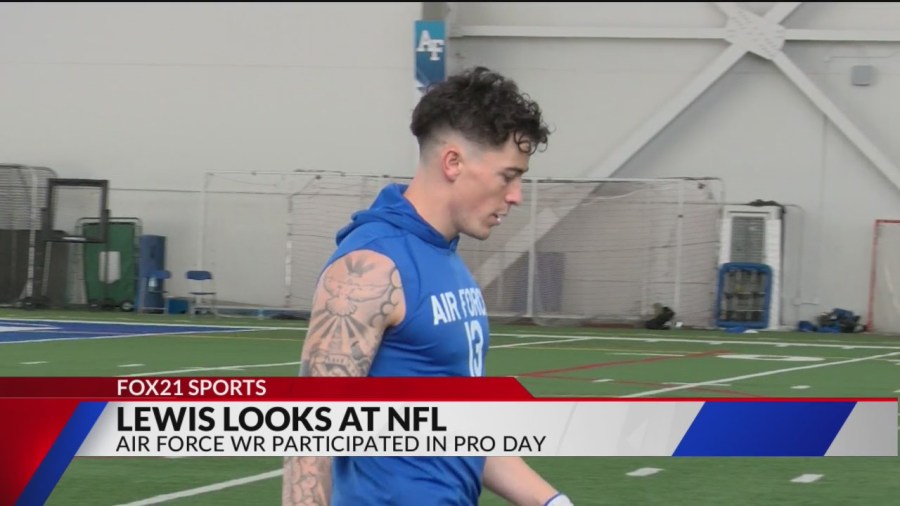 U.S. AIR FORCE ACADEMY — After collaborating in Air Force’s pro day, wide receiver Brandon Lewis admitted the NFL was by no means a part of his plan rising up.

“I’ll be honest, growing up, this wasn’t really what I envisioned,” Lewis mentioned. “I was just excited to get Division I offers to play football being a smaller guy.”

Nonetheless, a really stable season, main the crew in receiving yards and receiving touchdowns, coupled with some large performs in Air Force’s bowl recreation win over Louisville put Lewis on the radar of some NFL brokers. He scored two touchdowns with 172 receiving yards within the ServPro First Responders Bowl.

“You got to have film and having plays like that on my resume is good and I think it opened a lot of eyes and to do it on national TV against a power five school, it shows Air Force has athletes,” he mentioned.

It wasn’t till after the bowl recreation Lewis knew he’d be going to a pro day both.

“I wasn’t really planning on doing it,” he mentioned. “I had people telling me, Coach [Jake] Campbell saying ‘maybe you should do it. You can put up good times.’ And, after the bowl game Coach Campbell was like ‘yeah, you’re doing a pro day,’ so he didn’t really give me an option, so I was like I’ll give my everything and prepare for it.”

A handful of Falcons carried out in entrance of 23 NFL scouts, essentially the most scouts the Academy has ever seen. A lot of that was thanks to defensive sort out Jordan Jackson who missed the NFL mix with a hamstring damage. With the additional eyes at pro day, Lewis took benefit of the chance.

“I think I showed I was athletic,” Lewis mentioned. “I can run routes, I can catch the ball. I think I opened some eyes and I’m hoping I get an opportunity… I’m just hoping I get a shot. That’s all I need is just a shot… Just having a chance to do this is a blessing. I praise God and my family for doing a good job in supporting me through all of this.”