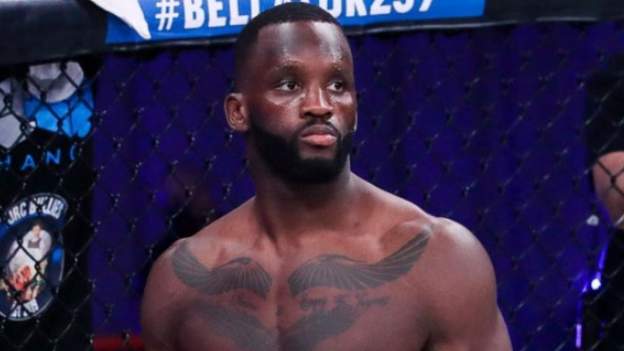 The thing which stands out most about Fabian Edwards is his confidence.

In his mind, it is not ‘if’ he beats mixed martial arts legend Lyoto Machida in the co-main event at Bellator London on Friday – it is “when”.

It is a remarkable display of resolve from Edwards, 29, considering the past three years where the Briton has suffered two defeats and seen three more fights get cancelled.

And yet, there is not a hint of uncertainty as Edwards sits back in his chair to describe how it will feel to face someone like Machida at Wembley Arena.

“When it’s all said and done and I’m in the car driving back to Birmingham, I will be thinking, ‘wow, I just beat Machida’,” Edwards tells BBC Sport.

“Then it might soak in. But for now, he’s just another person and I’m going to beat him.”

Although Edwards admits recent years have been “frustrating”, he says he has found solace at his gym in Birmingham.

Like his brother Leon in the UFC, who has also faced a number of fight cancellations in recent years, Edwards has used the time to sharpen his fighting skills.

Although fans can expect to see the best physical and technical version yet of Edwards on Friday, the middleweight believes the biggest improvements have been made in his mentality.

“I feel like I’m more mature – in the last year I came to understand myself a bit more and understand what works for myself,” he says.

“It’s about finding your own way and what works for you and I believe I’ve found that.

“You have to understand yourself as a person. On fight night, I have to walk around the arena, I want to see people and be chill. If someone wants to tell me to sit down, that wouldn’t be good for me. It wouldn’t bring the best out of me.”

‘I’m not surprised to be facing Machida’

In Machida, Edwards will be taking on a former UFC light-heavyweight champion who is a veteran of 37 fights.

The Brazilian has earned plaudits throughout his career for his unique karate style which helps complement his expert distance management and counter-striking ability.

Currently on a three-fight losing streak, however, there are signs the 43-year-old’s powers may be starting to dwindle.

Edwards says he believed fights against big names like Machida would eventually come to fruition the moment he started getting the better of older fighters in the gym.

“Once I did that I knew all of this would be possible. I’m not surprised by it.

“He’ll play the game of being long and moving. I can play that game, but the game-plan is smart pressure – breaking up the rhythm, cutting off the cage and just going out there and showing the best version of Fabian.”

‘Leon pushes me to do better’

The 30-year-old is unbeaten in 10 fights and is set to face UFC welterweight title holder Kamaru Usman when the champion has recovered from hand surgery.

Edwards says despite Leon’s success he feels no extra expectations and the relationship between the pair brings out the best in each other.

“I’m a sore loser. Regardless of if my brother was in the sport or not, I’m a competitive person and I want to win everything and be the best version I can be for myself,” says Edwards.

“I think [he pushes me] to do better. If there was a sparring session and I do better, the next time we sparred he would come back and be even better. We push each other. It’s always been like that.”