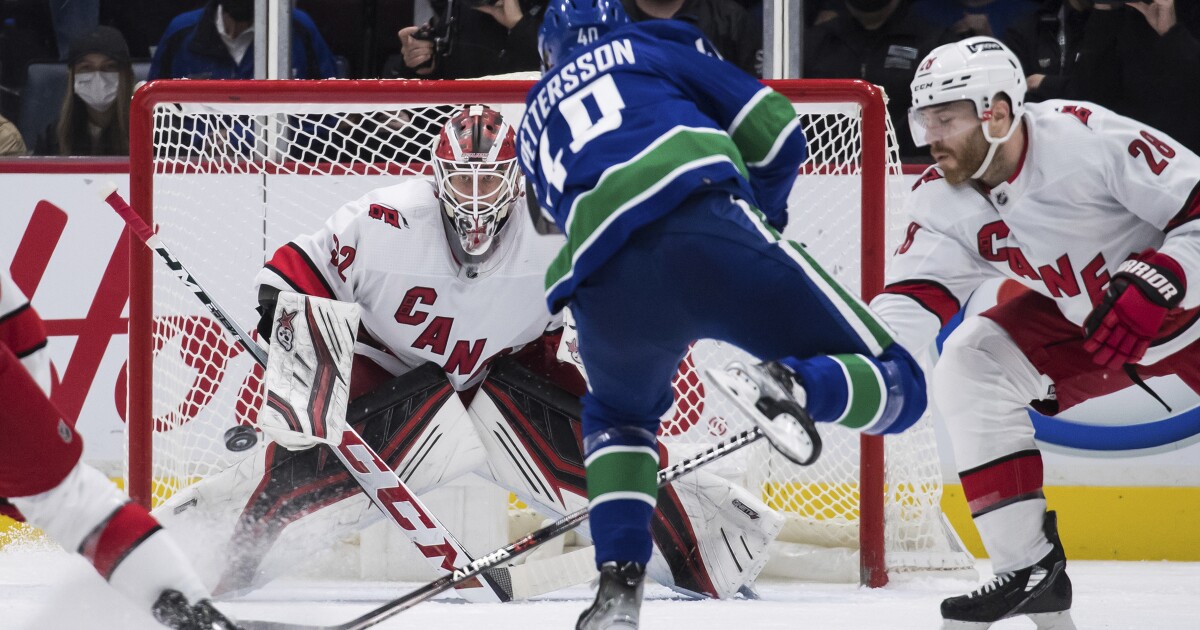 Elias Pettersson and Brock Boeser scored and the Vancouver Canucks extended their win streak to four games with a 2-1 victory over the Carolina Hurricanes on Sunday night.

The Canucks are undefeated under new coach Bruce Boudreau.

Martin Necas scored for the Hurricanes, who outshot Vancouver 29-26. Carolina had its four-game win streak halted.

Carolina was playing without star center Sebastian Aho, who missed the game with an undisclosed illness.

The Hurricanes called a timeout with two minutes left in the game and pulled Raanta in favor of an extra attacker. Demko was forced to make a big kick save on a shot by Andrei Svechnikov with just seconds left and the Canucks held on.

Necas’ goal put Carolina on the board early in the third

Vancouver’s Vasily Podkolzin sprawled out on the ice in an attempt to prevent Seth Jarvis’ pass, but the center managed to find Necas in front of the Canucks net. Necas flipped a quick backhanded shot at the 2:32 mark.

Vancouver came into the third up 2-0 after Pettersson scored off the rush 7:44 into the second. He took a nice pass from Conor Garland and scored on a shot from the hash marks to pad the Canucks’ lead. The goal was Pettersson’s fifth of the year and his first at even strength.

The Canucks went into the first intermission up 1-0 thanks to Boeser.

Stationed at the goal line, J.T. Miller sliced a pass in the high slot. Boeser blasted a wrist shot past Raanta on the stick side at 18:29 for his seventh goal of the season.

Miller got an assist on the play, extending his point streak to four games. He has a goal and four assists during the stretch.

Svechnikov batted a puck into the Vancouver net earlier in the frame, but the goal was quickly waved off for a high stick.

NOTES: Both sides were 0 for 1 on the power play. … Former Canuck Jalen Chatfield played his first game in Vancouver since signing with Carolina as a free agent in July. … Sunday marked the first meeting between the Canucks and ’Canes since Feb. 2, 2020.

Hurricanes: At Minnesota on Tuesday night to wrap up a five-game trip.