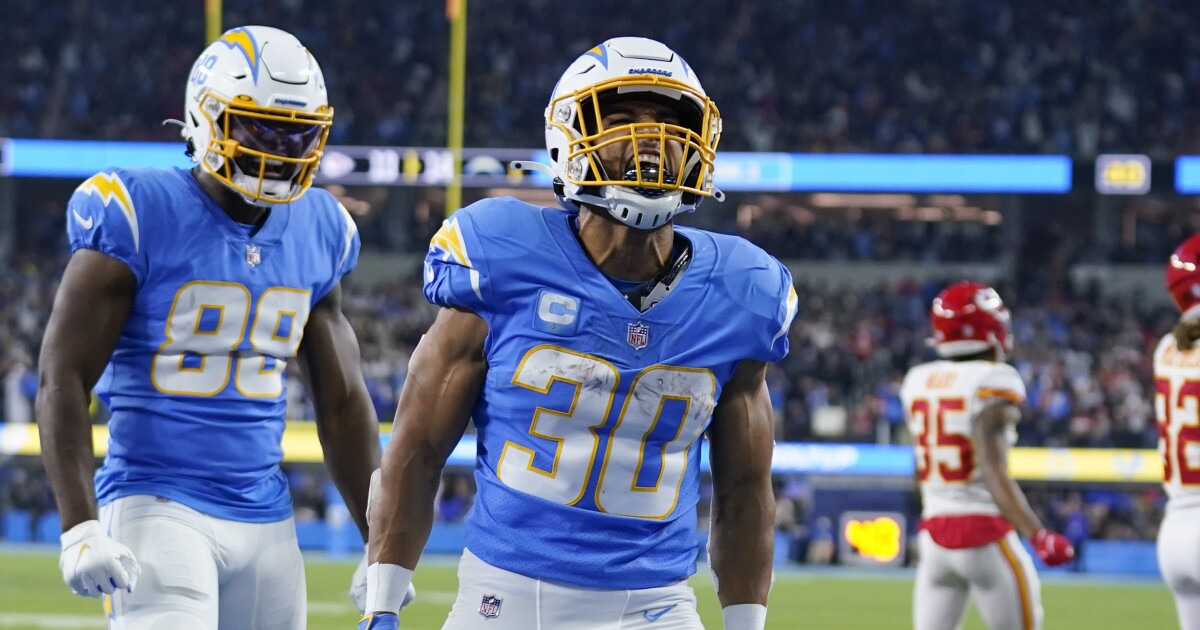 Breaking down how the Chargers (8-7) and Denver Broncos (7-8) match up heading into their game at 1:05 PST on Sunday at SoFi Stadium. The game will be shown on CBS.

When Chargers have the ball: When these teams met in late November in Denver, the Chargers began with consecutive three-and-out possessions, helping the Broncos open a 14-0 lead en route to a 28-13 victory. Another slow start for the Chargers would be ill-advised, particularly coming off their epic flop in Houston. This is a team that could use some early success to reset the mood and reignite some belief. The return of running back Austin Ekeler (COVID-19/reserve list) certainly will help. Ekeler is second in the NFL with 17 touchdowns and fourth among running backs with 1,347 yards from scrimmage. He said running the football Sunday will be vital, especially after the Chargers managed only 26 yards in seven carries in the first half against the Broncos in that November game. Denver is ranked 13th against the run but features one of the NFL’s stingiest defenses when it comes to points allowed. The Broncos are tied at No. 1 with the New England Patriots, both surrendering an average of 17.3 per game. Denver has held eight of its last nine opponents to 22 or fewer points. The Chargers have scored at least 28 points in five of six, the lone exception being that trip to Denver.

When Broncos have the ball: Denver will start Drew Lock at quarterback with Teddy Bridgewater out because of a concussion. This isn’t necessarily good news for the Chargers, who are 1-3 in games Lock has started against them. Lock hasn’t beaten any other team more than once in his 19 career starts. Chargers safety Derwin James Jr. did intercept Lock in November when Lock replaced Bridgewater for a stretch after the starter was injured. The Chargers struggled to stop Denver’s ground game in their first meeting, giving up 147 yards. The Broncos picked up 11 of the 23 first downs with rushing plays. They also converted eight of 11 third downs, the Chargers ranking last in the league in such situations. They’ve allowed their opponents to convert 51.1% this season, which is an historically poor number. Dallas leads the NFL in third-down defense with a success rate nearly 20 percentage points better than the Chargers’ mark. “We have to get off the field,” defensive coordinator Renaldo Hill said. “Good things happen when we get [No.] 10 the ball back.” That’s a reference to Justin Herbert, who is two touchdown passes away from setting the franchise record for most in a season.

When they kick: Veteran Dustin Hopkins was among eight Chargers activated off the COVID list Saturday, paving the way for his return after missing a week’s worth of practices. Hopkins is 15 for 16 on field goals and 23 for 25 on extra points in his nine games with the Chargers. Denver’s Brandon McManus is the second-most accurate kicker of field goals in team history, converting 81.7% of his attempts. Only Matt Prater has been better.

Jeff Miller’s prediction: This is a game the Chargers pretty much have to win to keep afloat their playoff hopes entering the season’s final week. The Broncos, facing a ton of COVID issues, are trying to be accommodating.