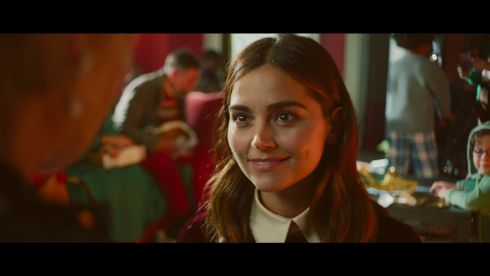 The year is 2021: a pandemic lingers in the air, supply chains are almost as fragile as hospital systems, orphan shipping containers are clogging up ports and Europe is on the brink of a trade war. Still, holidays are coming.

The first Christmas ad you inadvertently consume, like the first Christmas song you hear, has the capacity to trigger abrupt nausea and deep groaning. Oh, you wish it could be Christmas every day, do you? Let me spell out why that would defeat the purpose.

Luckily for advertisers, this impatience wears off like glitter from a cheap jumper, and soon you’re wondering why An Post was only recently deploying coy references to “you know what” instead of coming straight out with the C-word like everybody else.

By now there’s almost a full selection box of Christmas ads valiantly trying to capture our attention with impressive child actors and even more impressive faith in their brand’s ability to have sufficient stock of key products at critical times.

In the UK, the chance that they might do is reported to be influencing this year’s crop of festive messages in two ways: a desire to avoid close-ups of certain at-risk dinner table essentials lest this be thrown back in their faces if they run out of them, and a move to unveil Christmas campaigns sooner rather than later in a bid to inspire shoppers to buy early, buy frozen.

Although bare shelves have mostly been a Brexit Britain phenomenon so far, Ireland is not immune from an undersupply of HGV drivers and other pressure points in global shipping and manufacturing, though in the Irish market the focus hasn’t been on fresh produce shortages but on potential issues procuring in-demand toys – in particular, toys and gaming consoles that contain microchips.

These warnings, combined with the temptation to whittle down savings amassed during the hat-trick of lockdowns, suggest many retailers won’t have the hardest of sells this year as they persuade consumers to part with their money. Of course, that hasn’t stopped the biggest of them producing ads of epic scale and budget with a view to snatching market share off their moderately less festive rival down the road.

Just as everyone essentially has the same tree, there’s a fundamental samey quality to Christmas ads that actually makes them less interesting than ads that run the other 10 months of the year.

That’s why this column hasn’t touched the subject since 2017 – a vintage season in which a character in Marks & Spencer’s Paddington-starring effort was widely misheard as saying “f*** you, little bear”, prompting the creation of the social media hashtag #F***YouLittleBear.

Nothing so amusing is happening in M&S land in 2021. Instead, the retailer has Tom “Spiderman” Holland voicing smug gummy sweet Percy (the) Pig as he ventures round some surprisingly well-stocked aisles.

Brought to life by a clumsy fairy (Dawn French), Percy seemingly has no memory of his brief career as a Brexit cautionary tale last January, when M&S chief executive Steve Rowe admitted that importing the German-made sweets into Britain and then on to Ireland wasn’t going to cut it under the then new (and still current, at time of writing) EU-UK trade deal.

John Lewis sells towels and coasters in Arnotts but doesn’t have any physical stores in Ireland, so it’s barely worth mentioning that the British department store company has done an ad titled “Unexpected Guest” – always the best kind of guest to have at Christmas time, I find.

Elsewhere, Sports Direct makes the refreshing case for us to “go all out” – as in outside – by showing various sports stars having a pleasingly surreal blast in the snow, while in its biggest Christmas campaign to date, TK Maxx opts for joy over sentiment as an awkward young boy triumphs during his organ-playing local concert turn, after his rendition of Aerosmith’s Walk This Way is invigorated by the early gift of metallic winklepicker boots.

I have an early favourite and it’s Bags of Joy from Boots. The three-minute version opens with former Doctor Who star Jenna Coleman discovering that, like the Tardis, her handbag is bigger on the inside than it is on the outside. She lies back on her bed and showers herself with cosmetics and other items available from Boots before remembering that, as it’s Christmas, she should really be bringing joy to her Nan, her friends, a snowman and some random people at a fairground too.

This ad does a good job of ticking familiar boxes with its combination of magic touches, handwritten notes and consumerist honesty. Christmas means stuff. No, love – it means love. But love means stuff.

The most Christmassy thing about it, however, is nothing to do with any of that, but the fact that its director is Tom Hooper, erstwhile winner of the Academy Award for best director and also, in a completely separate CV entry, the director of Cats.

Two years ago, in a more innocent world, even a brief sight of Cats was deemed the worst thing you could inflict upon human eyes, and Hooper was cast out in the directorial wild. His return via advertising is like the first step on his path to redemption – it’s the season of goodwill, after all, and this year the special effects will be better.

It’s still far from 100 per cent jingle bells out there, with many brands waiting for more uncontroversial start dates, including the kings of “holidays are coming”, Coca-Cola. It remains to be seen whether the headline-generating shortage of HGV drivers will have given its marketers pause for thought, or whether it will once again depict an illuminated caravan of red trucks – a Christmas ad concept born in the globalisation-friendly 1990s – snagging all available licensed drivers in a mission to deliver Coke to remote places.

A Taika Waititi-directed ad Coca-Cola made in New Zealand last year recruited Santa Claus as a HGV driver – a great hire, though as strategies go, perhaps not entirely Brexit-proof.