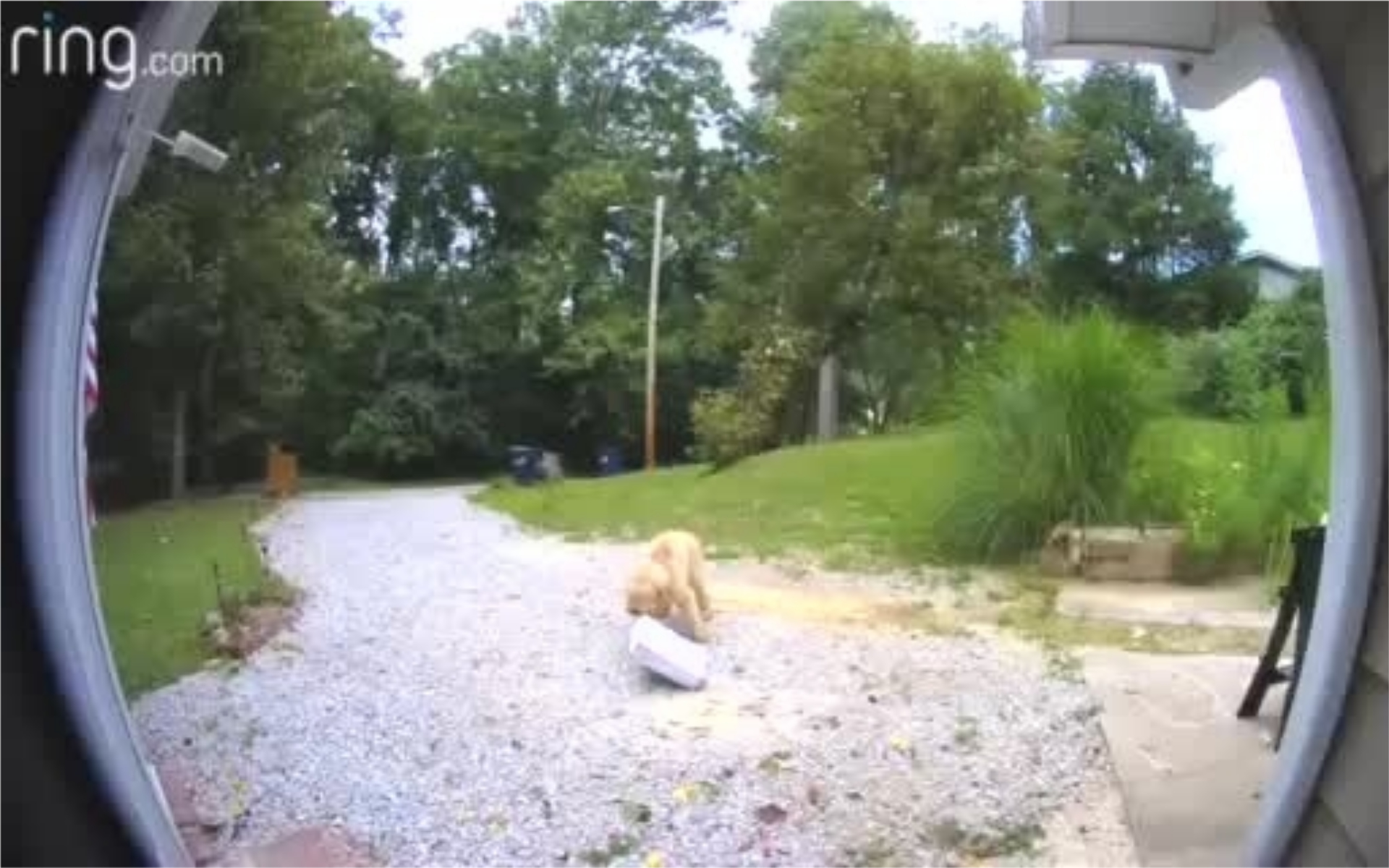 Hilarious footage of a dog trying—and failing—to steal a package from outside their neighbor’s home has been shared online.

The footage, which was shared by Ring.com, showcases the canine criminal’s failed attempts at dragging the package away from the property with the large rectangular box proving too much for the pet pooch.

While the dog is able to drag the item a third of the way down the owner’s gravel driveway, they soon run into trouble and soon begin to lose interest.

The sound of a nearby barking dog is enough to put them off the task entirely, with the dog beating a hasty retreat.

According to Ring, the footage was captured at a house in Ashland, Kentucky.

The package’s owner, Corey, told the company how he was initially alarmed after receiving a notification on his Ring video doorbell that someone was outside his property.

Any feelings of concern were quickly allayed, however, when he got a glimpse of the furry intruder trying to make a run for it with his package which, he said, contained a “leather jacket of all things.”

While this particular incident came to a happy conclusion, package theft represents a very real problem to millions of Americans every year.

According to research by Safewise, around 210 million packages have disappeared from outside properties across America in the last 12 months.

The same study, meanwhile, found that 72 percent of Americans have become more concerned about porch piracy in the past 12 months, in an increase of some 9 points from last year.

Some have already begun taking action to try and combat thefts of this kind.

One family in Utah, for instance, was able to track down an alleged serial thief after laying a trap involving a dummy package containing a GPS tracker.

Another couple in Missouri, meanwhile, decided to take things a little further by leaving a dummy package containing little more than dirty diapers for their would-be thief.

Away from the more serious subject of package thefts, dogs have made something of a habit of trying to take things they shouldn’t. Food, in particular, has often proven too hard to resist and resulting in comedy gold as a result.

For instance, a golden retriever recently went viral on Twitter after being caught trying to take food off the counter. It wasn’t so much the theft itself but rather his reaction to being caught that proved memorable.

Meanwhile, another crafty canine ended up in the doghouse after taking a large bite out of a defrosting turkey in an incident that derailed one family’s Thanksgiving celebrations.