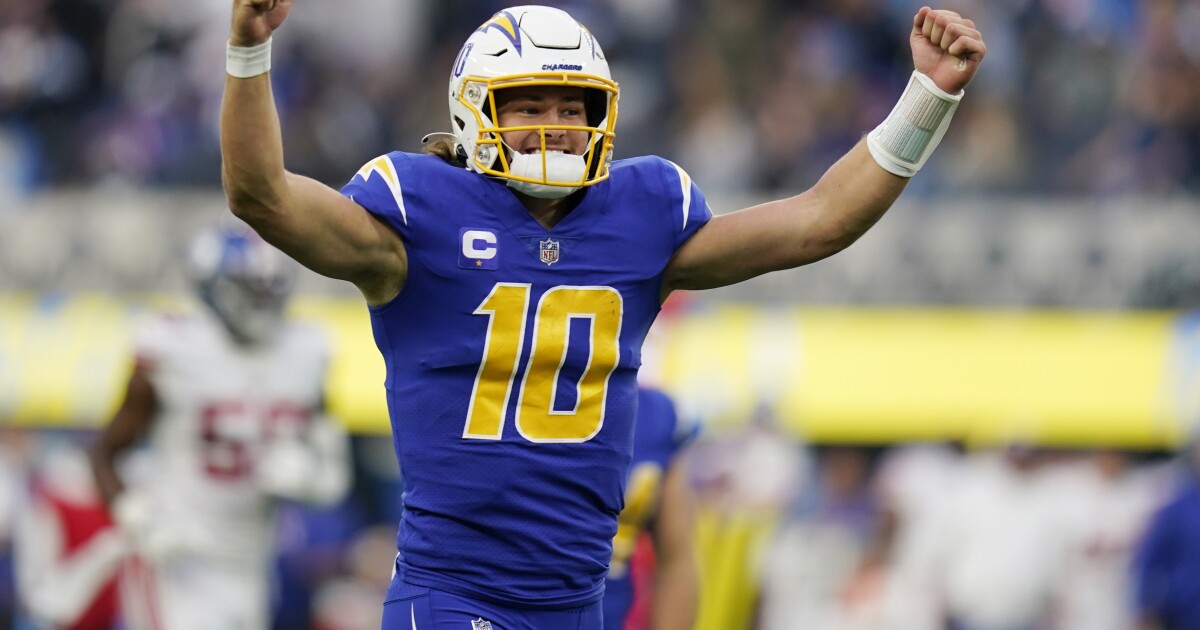 Dustin Hopkins added three field goals for the Chargers, who improved to 8-5 and are a game behind the Kansas City Chiefs going into Thursday night’s pivotal AFC West matchup.

The second-year signal caller went 16 of 22 for 204 yards and a touchdown as the Chargers took a 24-7 lead into halftime. His final throw of the first half was a 59-yard touchdown pass to Jalen Guyton.

The game was tied at 7 after the first quarter before the Chargers broke it open with 30 straight points. Joshua Palmer and Jalen Guyton — who picked up the slack with Keenan Allen on the COVID-19 list — each had TD receptions in the second quarter.

Palmer, who had five receptions for 66 yards, had a 12-yard score to give the Chargers a 14-7 advantage. Herbert, who completed 23 of 31 for 275 yards, then connected with Guyton on the 59-yard bomb with 17 seconds left in the half. Guyton, who made three catches for 87 yards, blew by Logan Ryan and Xavier McKinney.

Herbert also had a 1-yard TD pass off play-action early in the fourth quarter to make it 37-7.

Mike Glennon, starting for the second straight week with Daniel Jones out with a neck injury, was 17 of 36 for 191 yards with two touchdowns and an interception for the Giants (4-9), who have dropped three of their last four. He also ran for a score.

Glennon had a 3-yard TD pass to Eli Penny late in the first quarter to tie the game at 7. New York added a pair of scores in the final 15 minutes on Glennon’s 18-yard pass to Saquon Barkley and Glennon’s 7-yard scramble, plus a 2-point conversion.

Austin Ekeler opened the scoring with his 16th touchdown of the season on a 1-yard run. It was Ekeler’s ninth rushing score of the season.

Ekeler finished with 12 carries for 67 yards along with two catches for 17 yards. He hurt his ankle in the third quarter and did not return.

Penny’s touchdown was set up by Kyle Rudolph’s 60-yard reception, the longest catch of Rudolph’s 11-year career and the Giants’ longest play this season.

From the Giants 35, Glennon fired a pass to Rudolph near midfield. Rudolph caught it at the Chargers 47 and went up the left sideline, stiff-armed Trey Marshall at the LA 20, but was tackled by Marshall and Michael Davis at the 5-yard line.

The Giants’ previous longest play was a 54-yard pass from Jones to Barkley against New Orleans. Rudolph’s gain the second play of at least 25 yards in the three games since Jason Garrett was fired as offensive coordinator.

Giants: DL Leonard Williams suffered an elbow injury during the second quarter. Williams came into the game leading the team with 10 quarterback hits and was fourth with 61 tackles.