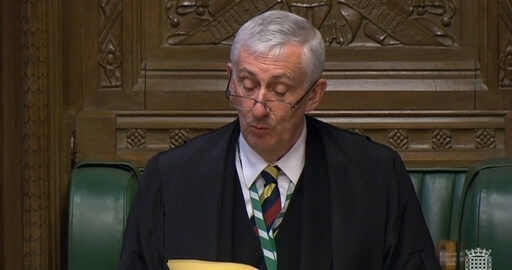 This afternoon MPs will hold an emergency debate on MPs standards in the wake of the Government’s controversial quashing of Owen Paterson’s recommended 30-day suspension last Wednesday, followed by a U-turn the subsequent day.

Yesterday the Sunday Times and the Mail on Sunday, both reported that Speaker Lindsay Hoyle could personally intervene in the debate, while the Telegraph has claimed he will not do so.

It was suggested that a proposed shake up of the rules regarding MPs standards could include a crackdown on those earning thousands from outside interests, and the right of MPs to appeal to a judge should the commissioner find them guilty of a standards breach.

MPs voted 250 to 232 last Wednesday to prevent the 30-day suspension of the former Conservative minister.

The government also whipped in favour of an amendment tabled yesterday by Dame Andrea Leadsom, recommending that “the current standards system should give Members of Parliament the same or similar rights as apply to those subject to investigations of alleged misconduct in other workplaces and professions”, which would entail the “right of representation, examination of witness and appeal”.

It suggested that the new committee is made up of four Conservative MPs, three Labour MPs and one SNP MP, however there have been indications opposition MPs could boycott the panel.

However on Thursday the government backtracked on these proposals, claiming that it did not have enough cross-party consensus for its standards overhaul, and vowed to soon hold another vote on the matter of Paterson’s suspension.

This followed a major backlash from backbench MPs on the vote, and widespread allegations of sleaze. 13 Conservatives voted against the motion and 60 abstained, including former prime minister Theresa May.

Later that day Owen Paterson announced that he would resign as an MP, a process made formal on Friday.