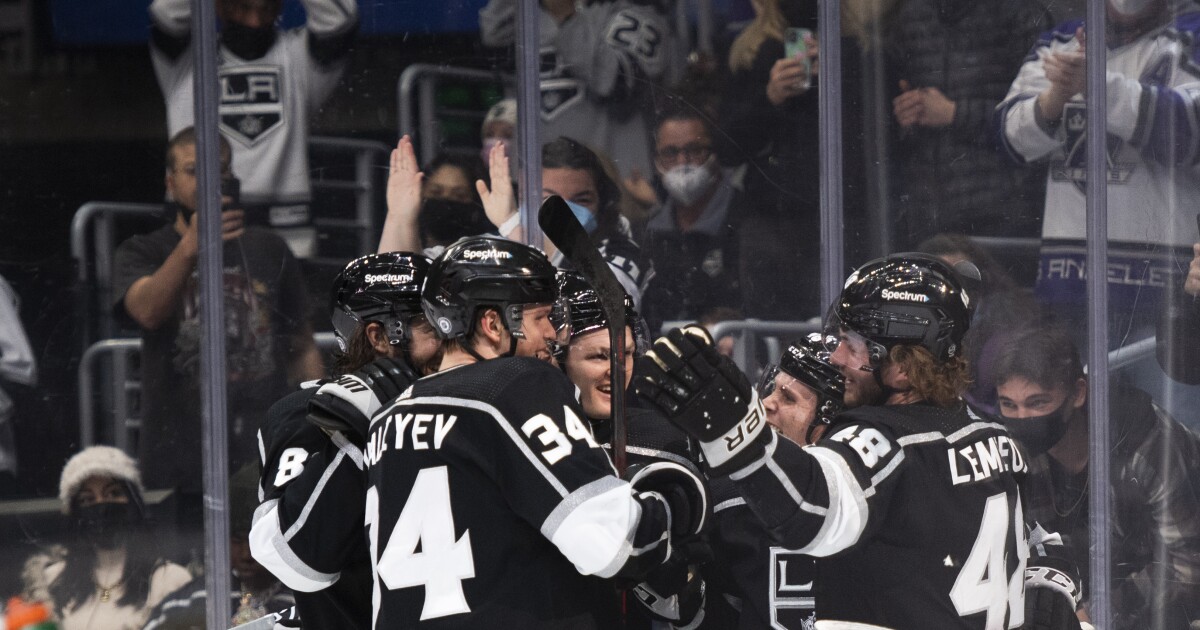 Viktor Arvidsson tied a career high with four points and accomplished something that hasn’t happened for a Los Angeles Kings player in 31 years — a goal 12 seconds into a game.

Arvidsson’s prolific night propelled the Kings to a 6-3 victory over the Philadelphia Flyers on Saturday and helped earn Todd McLellan his 500th win as an NHL coach.

Arvidsson had two goals and two assists. His wraparound goal was the quickest by a Kings’ player since Wayne Gretzky scored 12 seconds into a January 1991 game versus Vancouver. Arvidsson skated around the back of the net and had an opening on the far side as Martin Jones was unable to get his left leg there in time to block it. The goal tied for the third-quickest in Kings’ history to start a regular-season game.

“It was nice to score that early. I felt like I had some space and I could get one in,” said Arvidsson, who has eight goals in his first season with the Kings.

Arvidsson, whose other four-point game came in 2007 with Nashville, added an empty-net goal late in the third period to put the game out of reach.

McLellan is the 27th coach in league history to reach 500 wins. He is in his third season behind the Kings’ bench after previous stops in Edmonton and San Jose.

“It’s a good night for me as an individual, but more importantly for the team. The wins are important,” McLellan said. “As people hit milestones, you talk about them, but it’s always about the team.

“The guys played hard tonight. We weren’t real clean and some bad habits kind of snuck into our game a bit. But we’ll have four days to fix it.”

Trevor Moore had a career-high four points with a goal and three assists for Los Angeles, which is a season-high four games over .500.

Phillip Danault had a goal and two assists, and Brendan Lemieux and Adrian Kempe also scored for the Kings. Jonathan Quick made 33 saves for his sixth win in his last seven games, and Drew Doughty added two assists.

“I thought we played alright for a lot of the game. But giving up a couple of early goals is tough to come back from,” Jones said.

Farabee tied it at 1 at the 13-minute mark of the first when he put in the loose puck after Quick made a pad save on Cam Atkinson’s snap shot. Los Angeles regained the lead less than two minutes later when Moore put in a rebound after Danault was unable to score on a wraparound.

The Kings extended their lead to 4-1 in the second period on goals by Kempe and Lemieux. Kempe tallied Los Angeles’ first power-play goal in six games 46 seconds into the period on a one-timer off Anze Kopitar’s pass. It was Kempe’s team-leading 14th of the season.

Lemieux extended his goal-scoring streak to three games on a breakaway at 13:27. It was also the left wingers’ fifth goal in the last seven games.

Hayes scored on a one-timer with the Flyers on a two-man advantage to cut it to 4-2 less than three minutes into the third period. The Kings answered midway through the third on Danault’s wrist shot off a rush. Provorov’s one-timer at 16:01 was his second goal in the last three games.

“I think their goalie played well. We got some opportunities, but we gave them too much,” Flyers interim coach Mike Yeo said.

The Kings remained perfect on defending penalty shots this season as Quick stopped Atkinson at 12:16 of the first. Cal Petersen stopped the first two, while Quick faced his first since March 2020. He is 7 of 10 stopping penalty shots during his career.

Flyers: Conclude their four-game trip against the Anaheim Ducks on Tuesday.