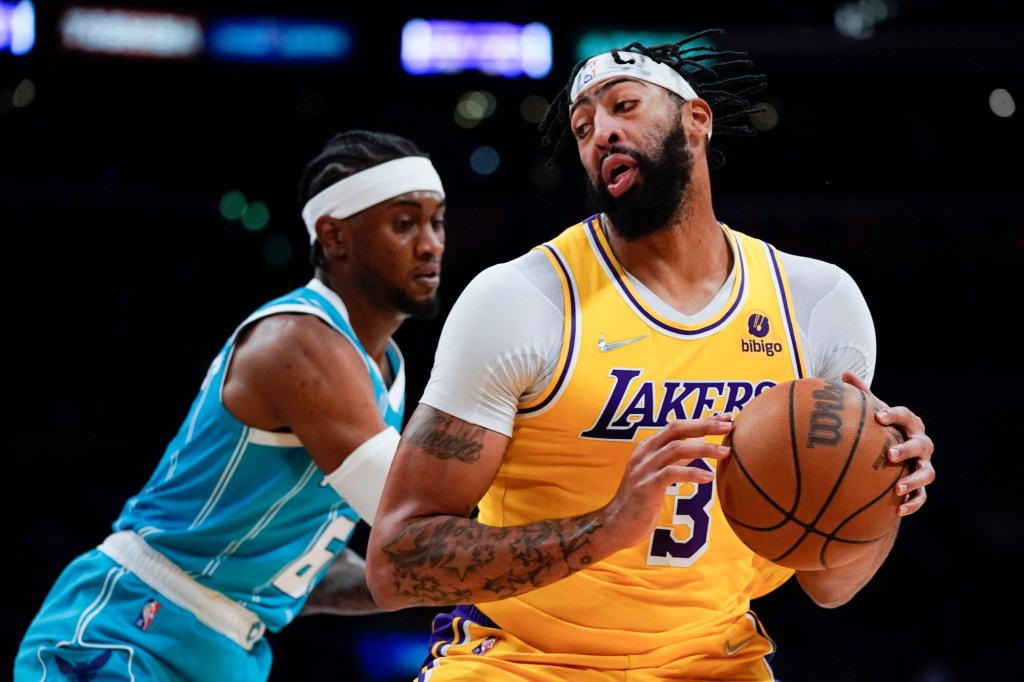 LOS ANGELES — Without LeBron James, nothing comes easy for the Lakers.

At least on Monday night, winning did come.

It took until the last possession of overtime for the Lakers (6-5) to exhale, surviving a 14-point blown lead and grinding out 11 hard-fought points in the extra period to get a 126-123 victory over the Charlotte Hornets at Staples Center.

Much of the work was put on the shoulders of Anthony Davis, who finished with a team-best 32 points – six in overtime, including a pair of free throws that gave them a three-point lead with less than a minute left. The All-Star big man added 12 rebounds, five blocked shots and three steals.

Adding to the feat: Davis has tussled with a stomach bug for days. He threw up five times before having to exit early from Saturday’s game in Portland, then once Monday night after the third quarter. But Davis still muscled out the star turn for the short-handed hosts because he knew how much it would mean.

Russell Westbrook bounced back, relatively speaking, from his 1-for-13 shooting night in Portland, notching his second triple-double (17 points, 14 assists, 12 rebounds) as a Laker. He was particularly effective in the early going with eight first-half assists, even as he continued to be flustered at the rim and finished 5 for 15 from the field.

Still, the Lakers were riding high with nine minutes left, when Carmelo Anthony – who had elicited cheers all night on his way to a season-high 29 points – nailed a 3-pointer to put them ahead by 14, a gulf by the standards of the evening.

But their grip on the game slipped on an odd fourth-quarter sequence that cost them dearly with just 3:39 left. They failed to get a review of a foul that went against Austin Reaves, then both Anthony and Westbrook were rung up on technical fouls that allowed Ball to squeeze five points out of one possession, all at the free-throw line.

“It was a lot going on at that particular moment,” Anthony said. “It was just a lot of passion, a lot yelling, a lot of screaming trying to figure it out.”

The lead slid from nine points to four points, and just kept sliding. The offense sputtered and scored just five points through the end of regulation. Westbrook also missed a free throw that would have given the Lakers the win in the fourth.

The last look was uninspired: a turnaround midrange jumper from Davis, something he has struggled with to start the season. The Hornets corralled the rebound with just one second left and called a timeout, but their last attempt by Miles Bridges (19 points) was nowhere near the mark.

“It would have been nice to hold that lead and win this one easy but this league is tough,” Coach Frank Vogel said. “Every team that comes in here is a good team and giving us their best shot and sometimes you’re going to have to win ugly and we’ll take it.”

Super-sub Anthony had Lakers fans chanting his name throughout the game, buzzing for his check-ins at the scorer’s table, inhaling deeply every time he touched the ball, and tapping three fingers to their heads in sync with the future Hall of Famer, as he put on a show well worth their admiration.

It was Anthony who initially stole the spotlight from his younger challenger, scoring 29 points on a sizzling 9-for-13 shooting (7 for 10 from 3-point range), giving him a Staples Center mark of well over 60% from behind the arc this season (38 for 59).

“People don’t see it: I always work on that part of my game,” Anthony said of his catch-and-shoot prowess. “You guys are actually seeing it more often now. So, I feel good, man. I feel like I’m in a great rhythm.”

While Anthony converted his fair share of unlikely shots, he was only tangentially involved in the most improbable basket of the game. Anthony barely saved a ball from going out of bounds close in the final seconds of the third quarter, and he attempted to bounce it off Kelly Oubre’s feet. It ricocheted into the hands of Malik Monk, a former Hornet, who heaved it in from midcourt to beat the buzzer, putting the Lakers ahead 94-87 at the break.

In times like the bumpy fourth quarter, it was hard to overstate how much the Lakers missed James, without whom they’re 2-3 with both wins in overtime. There’s no clear timeline for when the four-time league MVP might rejoin the lineup, and lounging in courtside seats with business associates Rich Paul and Maverick Carter for the better part of the third quarter made him look more like a casual spectator.

Ball got a warm hometown welcome for his second Staples Center game in as many nights. Even Lakers owner Jeanie Buss applauded for the 20-year-old’s introduction by Lawrence Tanter.

But immediately after the opening tip, all eyes were drawn to Lakers center DeAndre Jordan, who had three dunks in the first four minutes of play, including a one-armed lob finish atop a helpless Mason Plumlee that shook the arena. After his first shift of seven minutes, Jordan led the team with 10 points – a resounding statement after Vogel acknowledged before the game that he had felt “temptation” to start a smaller lineup with Davis at center.

Another older Laker who performed above his season standard: Rajon Rondo. The 35-year-old guard checked in with 4:52 left in the third quarter, and the Lakers finished on a 24-10 run to seize the lead going into the final frame. During that sequence, Rondo doled out six of his eight assists, including five directly to Davis.

But if he had more to offer in the fourth, the Lakers didn’t get to see it. Rondo was unceremoniously ejected with a flagrant two foul early on in the period after swatting an arm down on Rozier’s head.

The Lakers face the Miami Heat on Wednesday. Davis hopes his illness will subside by then.