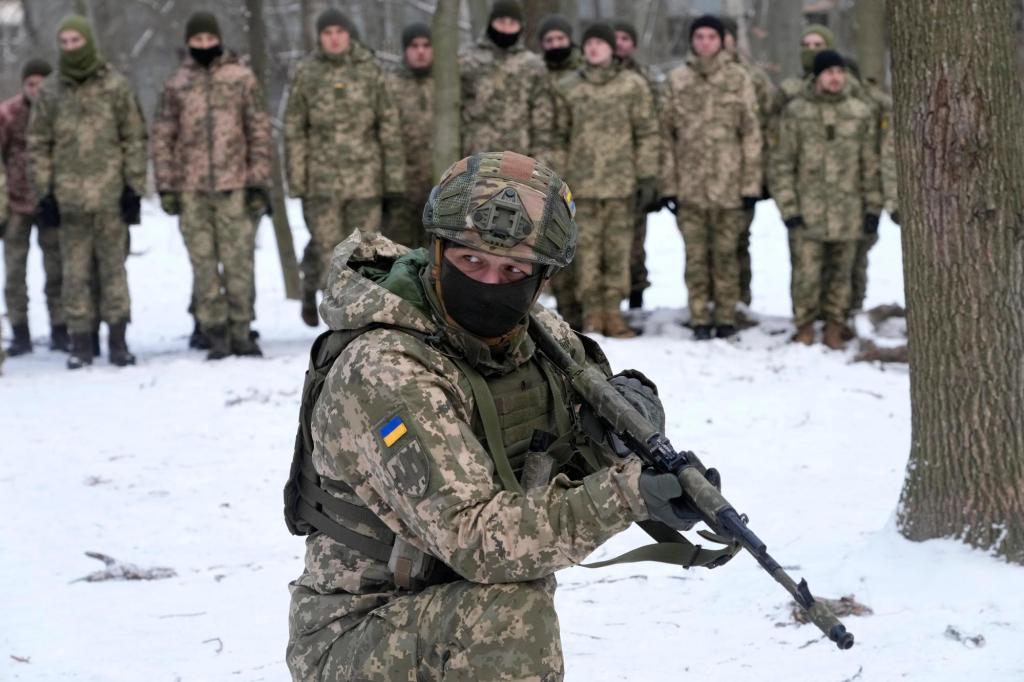 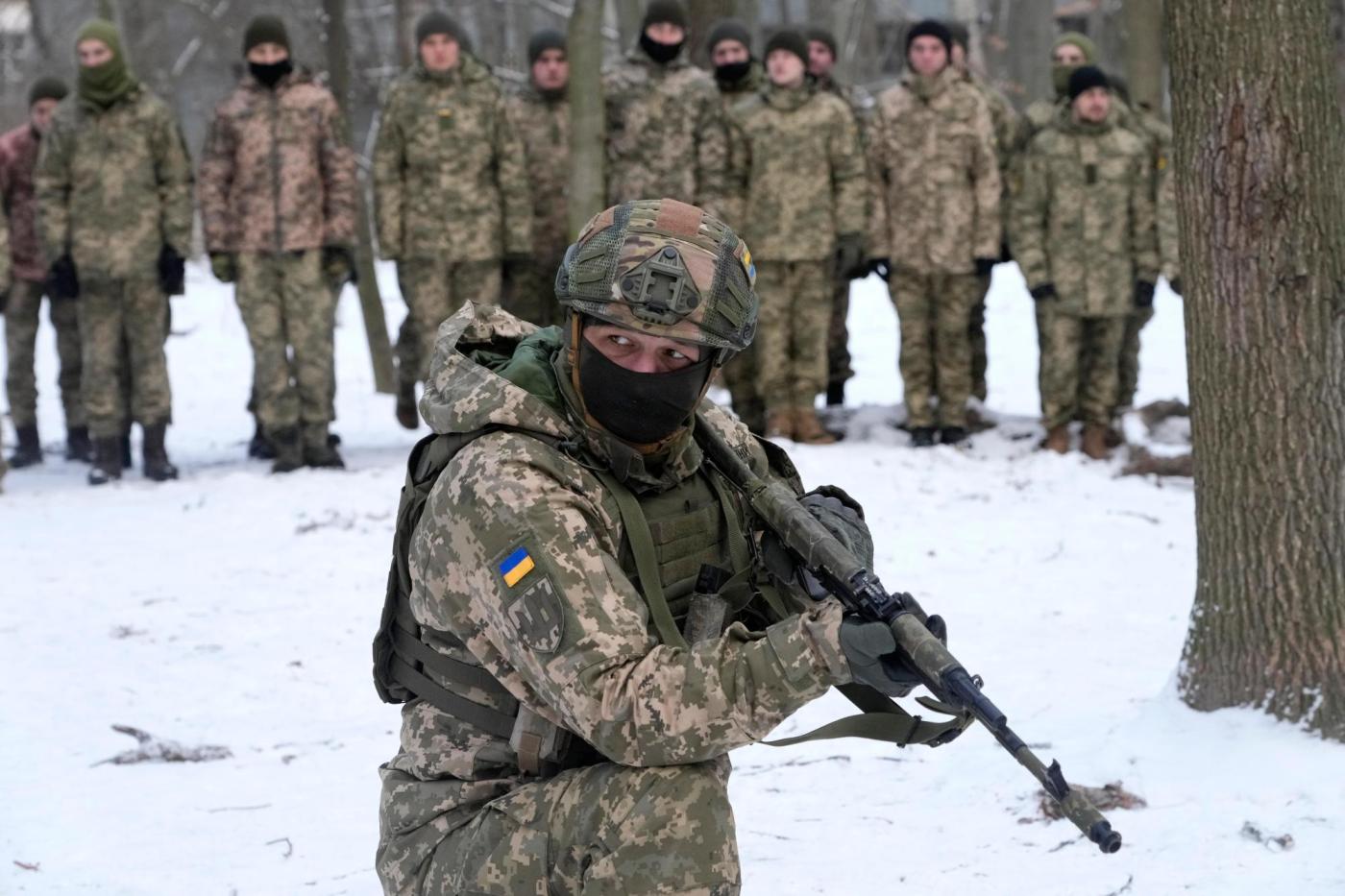 BRUSSELS (AP) — Tensions soared Monday between Russia and the West over concerns that Moscow is planning to invade Ukraine, with NATO outlining potential troop and ship deployments, Britain saying it would withdraw some diplomats from Kyiv, and Ireland denouncing upcoming Russian war games off its coast as unwelcome.

The Western alliance’s statement summed up moves already announced by member countries, but restating them under the NATO banner appeared aimed at showing its resolve. It was just one of a series of announcements that signaled the West is ramping up its rhetoric in the information war that has accompanied the Ukraine standoff.

Russia has massed an estimated 100,000 troops near Ukraine’s border, demanding that NATO promise it will never allow Ukraine to join and that other actions, such as stationing alliance troops in former Soviet bloc countries, be curtailed. Some of these, like any pledge to permanently bar Ukraine, are nonstarters for NATO — creating a seemingly intractable deadlock that many fear can only end in war.

Russia denies it is planning an invasion, and says the Western accusations are merely a cover for NATO’s own planned provocations. Recent days have seen high-stakes diplomacy that failed to reach any breakthrough and maneuvering on both sides.

NATO said Monday it is bolstering its “deterrence” in the Baltic Sea region. Denmark is sending a frigate and deploying F-16 warplanes to Lithuania; Spain is sending four fighter jets to Bulgaria and three ships to the Black Sea to join NATO naval forces; and France stands ready to send troops to Romania. The Netherlands also plans to send two F-35 fighter aircraft to Bulgaria from April.

NATO will “take all necessary measures to protect and defend all allies,” Secretary-General jens Stoltenberg said. “We will always respond to any deterioration of our security environment, including through strengthening our collective defense.”

In Washington, Pentagon leaders have proposed a range of options for President Joe Biden to reinforce the U.S. military presence in Eastern Europe and the Baltics as a demonstration of American commitment, according to two officials who spoke on condition of anonymity to discuss internal planning.

One of the officials said no specific deployments have been proposed but some unspecified U.S. military units have been told to plan for that possibility. The other official said Sunday it is possible that reinforcements could be sent from U.S. bases, in addition to possible shifts of troops within Europe, but for the moment the White House and Pentagon are only “exploring options.”

“We’ve always said we would reinforce our allies on the eastern flank and those conversations and discussions have certainly been part of what our national security officials have been discussing with their counterpart now for several weeks,” said White House press secretary Jen Psaki.

Later Monday, Biden is to hold a video call with several European leaders on the Russian military buildup and potential responses to an invasion, the White House said.

In Moscow, Kremlin spokesman Dmitry Peskov said it was NATO and the U.S. who were behind the escalating tensions, not Russia.

The NATO announcement came as European Union foreign ministers sought to put on a fresh display of unity in support of Ukraine, and paper over concerns about divisions on the best way to confront any Russian aggression.

In a statement, the ministers said the EU has stepped up sanction preparations and they warned that “any further military aggression by Russia against Ukraine will have massive consequences and severe costs.”

Separately, the EU also committed to increase financial support for embattled Ukraine, vowing to push through a special package of 1.2 billion euros ($1.4 billion) in loans and grants as soon as possible.

U.S. Secretary of State Antony Blinken held talks with Russian Foreign Minister Sergey Lavrov on Friday and said the U.S. would give Russia written responses to Moscow’s proposals this week, offering some hope that any invasion could be delayed for at least a few more days.

The West is nervously watching Russian troop movements and war games in Belarus for any signs of an invasion. Russia has already invaded Ukraine once, annexing the Crimean Peninsula in 2014. It also supported pro-Russian Ukrainian separatists fighting the Kyiv government in the country’s eastern region known as the Donbass. About 14,000 people have been killed in the conflict.

Asked whether the EU would follow a U.S. move and order the families of European embassy personnel in Ukraine to leave, EU foreign policy chief Josep Borrell said: “We are not going to do the same thing.”

Britain said it is withdrawing some diplomats and dependents from its Kyiv Embassy.

British Prime Minister Boris Johnson said an invasion was not inevitable, but “the intelligence is pretty gloomy.” He added that “I think that sense can still prevail.”

Ukraine’s Foreign Ministry spokesman, Oleg Nikolenko, said the U.S. decision was “a premature step” and a sign of “excessive caution.” He said Russia is sowing panic among Ukrainians and foreigners in order to destabilize Ukraine.

Germany has issued no similar order, with Foreign Minister Annalena Baerbock stressing that “we must not contribute to unsettling the situation further.”

“This isn’t a time to increase military activity and tension in the context of what’s happening with and in Ukraine.” he said. “The fact that they are choosing to do it on the western borders, if you like, of the EU, off the Irish coast, is something that in our view is simply not welcome.”

NATO members Estonia, Latvia and Lithuania said they plan to send U.S.-made anti-tank and anti-aircraft missiles to Ukraine, a move endorsed by Washington.

But questions have arisen about EU unity. Diverse political, business and energy interests have long divided the 27-country bloc in its approach to Moscow. About 40% of the EU’s natural gas imports come from Russia, much of it via pipelines across Ukraine, and many are skittish about being cut off from that supply in winter.

Diplomats and officials said hard-hitting sanctions are being drawn up with the EU’s executive branch, the European Commission. They were reluctant to detail the measures but said they would come within days of any attack.

In talks with European allies throughout the crisis, administration officials said they have remained cognizant that Europe’s trade, energy and financial linkages with Russia are far more significant than they are for the U.S.

A senior administration official who spoke on condition of anonymity to discuss internal deliberations said as they’ve approached designing potential sanctions, they’ve kept “in the front of our mind” the “need to be responsible” about their possible effect on European and global economies.

But the White House has also suggested they’ve approached talks with Russia with a measure of confidence and backing from European allies that they didn’t have before the annexation of Crimea.

Russia’s brittle economy is overly reliant on energy exports. President Vladimir Putin has made clear his ambition to diversify the economy, particularly in sectors like defense and civil aviation, but the U.S. and European allies have a dominant position in producing and exporting the technologies, software and equipment crucial for Russia in those sectors.

Throughout the talks, European officials have underscored having a “legitimate analysis and understanding of … what will actually make Russia hurt” and what the “collateral costs” might be, according to a second senior administration official.