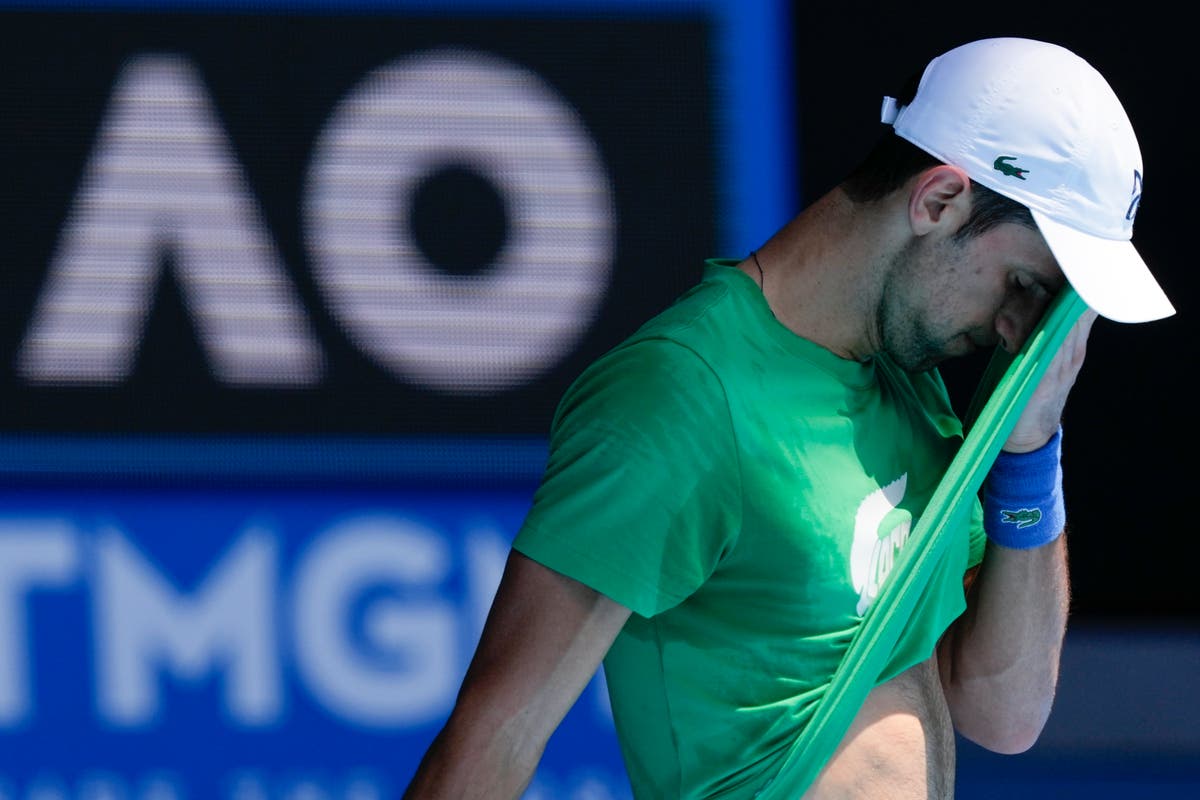 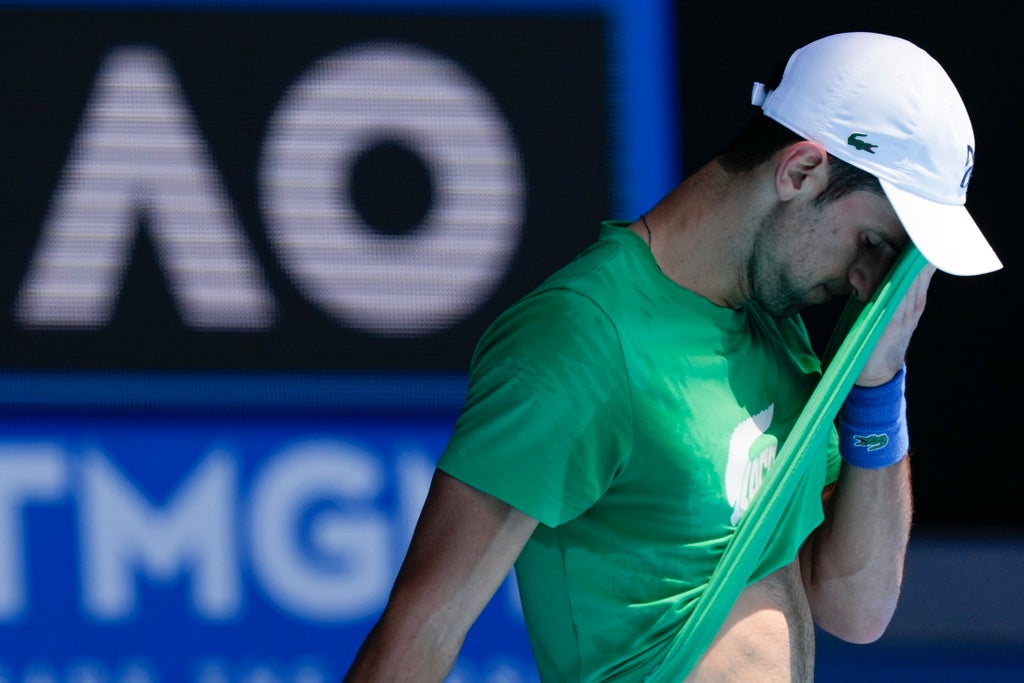 Martina Navratilova tells Djokovic to ‘suck it up’ and ‘go home’

Novak Djokovic has had his Australian visa cancelled by the country’s immigration minister, Alex Hawke, and faces deportation from the country just three days before the Australian Open begins. Hawke released a statement saying it was in the “public interest” to cancel Djokovic’s visa. “Today I exercised my power under section 133C(3) of the Migration Act to cancel the visa held by Mr Novak Djokovic on health and good order grounds,” he said.

This is the second time that Djokovic has had his visa revoked and his lawyers are expected to challenge the decision in the court. The first decision went to the Federal Circuit and Family Court this week and was quashed by a judge on procedural fairness grounds. Djokovic was released from Border Force detention and began training in Melbourne ahead of the tournament as he chases a men’s record 21st Grand Slam singles title.

However, pressure has been building all week after he broke his silence over a number of accusations of breaking Covid protocol on Wednesday, and he conceded that he broke isolation and conducted an interview with French newspaper L’Equipe despite knowing that he was positive for the virus, such a transgression could result in up to five years in prison if proven that he lied about his positive test.

Follow all the latest news below as Djokovic fights deportation once more.

Murray doesn’t want to “kick Djokovic when he’s down”

Andy Murray has had a successful day in Australia as he has reached the ATP final after fighting back against Reilly Opelka.

“It’s unfortunate that it’s ended up in this sort of situation, and who knows? I don’t know what the process is from now. I don’t know what route he goes down, if he can appeal that and how long that takes, and can he still be out practising whilst that process is going on or still competing in the tournament?

“I just want it obviously to get resolved. I think it could be good for everyone if that was the case. It just seems like it’s dragged on for quite a long time now and it’s not great for tennis, not great for the Australian Open, not great for Novak.

“Obviously a lot of people have criticised the government here, as well. It’s not been good.”

The hearing is still adjourned and is expected to commence shortly.

In the meantime, have a read of what has been happening today in Djokovic’s case and what it all means.

Djokovic has had his visa cancelled once again by the Australian government but he does intend to fight them on it in order to compete at the Australian Open. The event begins on Monday with Djokovic’s first match on Monday or Tuesday night.

Djokovic may not be currently detained but the government suggested he could be on Saturday.

This would happen before the interview with immigration officers at 8am AEDT. He could be permitted to go to his lawyers offices as long as Border Force officers were allowed on the same floor.

He would then go back to detention at midday on Saturday.

The hearing is still adjourned but it is worth noting the government representative, Mr Lloyd, said they could accommodate an accelerated timeline.

Djokovic’s lawyers were clear they wanted proceedings wrapped up by Sunday as the player is due to compete in his first match at the Australian Open either Monday or Tuesday night.

If Djokovic is permitted to stay in the country he will be bidding to win a record 21st grand slam.

The hearing has adjourned and is expected to return shortly.

This is a good opportunity to sum up what has happened so far.

Djokovic’s lawyers intend to submit an injunction at 10.15pm AEDT to block Djokovic’s deportation. The government have agreed to not deport the world no. 1 until legal proceedings have concluded.

The player’s representatives also argue the immigration minister Alex Hawke wants to prevent Djokovic from playing in the Australian Open to not “excited” anti-vaccination groups.

The full reasons from Hawke have not been published but this is what Nick Wood, lawyer for Djokovic, said: “The present set of reasons is starkly different [from the first cancellation].

“The minister assumes in Mr Djokovic’s favour every single fact that might have been in issue previously, that he’s complied with the law, that he poses only a negligible risk to others, Mr Djokovic has a medical reason not to be vaccinated, and that Mr Djokovic is of good standing.”

Djokovic is also not being held in detention and is expected to attend a meeting with immigration officials on Saturday at 8am AEDT.

Nick Wood has re-iterated his standpoint on Alex Hawke’s decision to re-cancel the visa.

He says Hawke’s decision is “irrational”.

Wood said: “The present set of reasons is starkly different. The minister assumes in Mr Djokovic’s favour every single fact that might have been in issue previously, that he’s complied with the law, that he poses only a negligible risk to others, Mr Djokovic has a medical reason not to be vaccinated, and that Mr Djokovic is of good standing.”

Judge Kelly is pointing out confusion which needs to be cleared up. He says it’s known Djokovic hasn’t been vaccinated and was allowed to travel on the assumption having Covid was an exemption.

He says this matter has not been cleared up (as to if it is an exemption).

They won’t be deporting Djokovic yet and will wait until legal proceedings are over. So Djokovic’s lawyers will have their opportunity to seek the world no. 1’s stay in Australia.

They add Djokovic won’t be detained tonight as long as he attends a meeting tomorrow.

Djokovic’s lawyers are now saying immigration minister Alex Hawke has used different reasons to cancel his visa to that of the first cancellation.

The reasons for the first cancellation was that Djokovic was a risk to others as he isn’t vaccinated.

But now Hawke says he has limited risk to others as he recently had Covid. In documents Hawke has reportedly called Djokovic a man of “good standing” and concedes he has an “exemption”.

The lawyers say they believe a consideration why Hawke has decided to cancel the visa is to not aggravate anti-vaccination sentiments.

Nicholas Wood SC says an injunction will be submitted by 10.15pm AEDT and they are keen to get proceedings rolling in order to get Djokovic to play.

They are clear it’s even more time sensitive as Djokovic’s first match at the Australian Open will be on either Monday or Tuesday night.