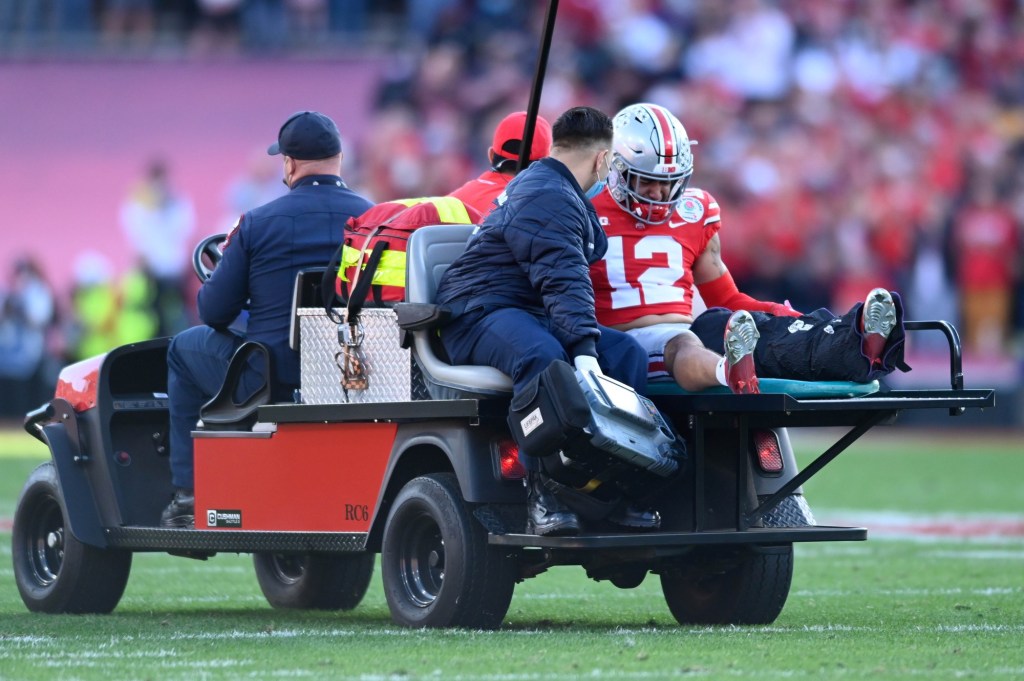 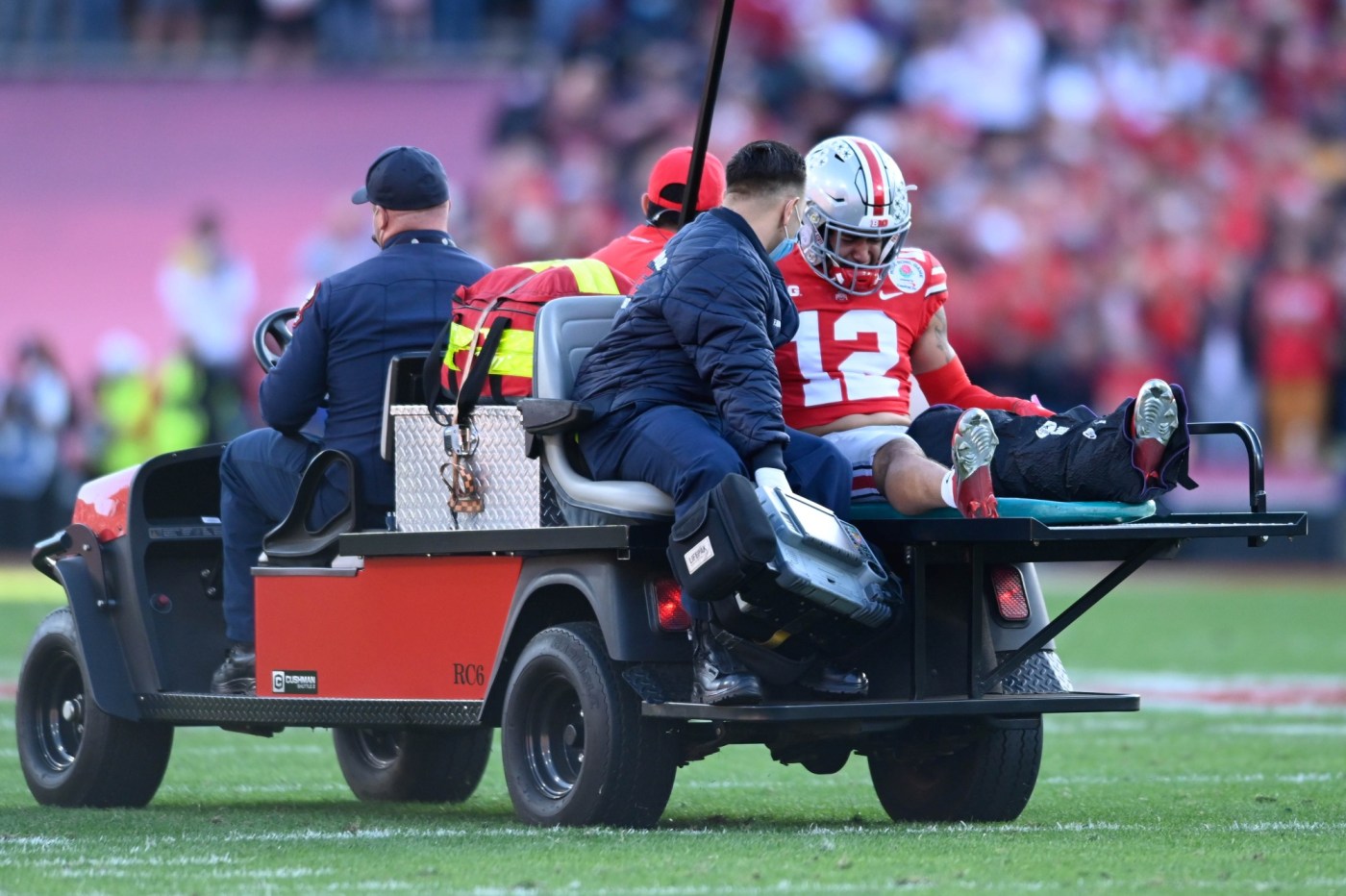 PASADENA — In a sea of scarlet and second-half scoring, Ohio State University coach Ryan Day said the Buckeyes were short handed, but they responded well after halftime to pull out a 48-45 victory against Utah in the Rose Bowl Game on New Year’s Day.

“We were shorthanded and there were some guys who weren’t here today,” Day said.

However, it was the standout play from the team’s younger players, like freshman quarterback C.J. Stroud, who graduated from Rancho Cucamonga High School in December 2019, sophomore wide receiver Jaxon Smith-Njigba and freshman wide receiver Marvin Harrison Jr. that carried the Buckeyes to the comeback victory.

Stroud finished the game by completing 37 of 46 attempts, for 573 yards passing and six touchdown passes and one interception.

Day believes winning the Rose Bowl behind the strong play of underclassmen bodes well for next season.

“I think, as we springboard into this off-season, that’s the part that we’re really going to go back upon in this game is the leadership that drove us in the second half that we weren’t going to be denied,” Day shared in reference to Stroud and Smith-Njigba.

“If we want to get to where we want to be next year – it’s a long way away from now but I’m already thinking about that first game and what that means is the leadership from these two guys has got to really springboard, especially the way they played in the second half of this game, really the entire game. It’s really going to build some momentum.”

Ohio State finished their season 11-2. The Buckeyes will return key players like Smith-Njigba and Stroud but they will be draft eligible next season, which sparks the question whether the dynamic duo has already played their first and only Rose Bowl Game.

As the crowd watched Utah’s Britain Covey march down the field for his 97-yard kick return for a touchdown, Ohio State had two players down and injured on the other side of the field.

Ransom was transported to a local hospital for x-rays, according to ESPN.

“I don’t know exactly what happened,” Day said. “It shows you what a tough game it is. … Hopefully he gets a quick recovery.”

Utah quarterback Cameron Rising was knocked out of the game in the fourth quarter after he was tackled and his head hit the field. He appeared briefly motionless before being able to get back to his feet.

“I don’t think he ever lost consciousness,” Utah coach Kyle Whittingham said. “I wasn’t there right when he hit the turf, obviously. I came out there shortly thereafter. He’s doing fine now according to what the post-game report was. Unless something that we don’t know about materializes, he should be okay.”

The injuries to Rising and Ransom have already been used as examples as to why players are opting-out.

He didn’t return to the game but was spotted walking on the field after the game. Backup quarterback Bryson Barnes finished out the game in place of Rising.

“I couldn’t be more proud of what (Barnes) did when he came into a tough situation and led the team right down the field for the tying touchdown,” Whittingham said.

Ohio State freshman defensive end Jack Sawyer was the first of two players disqualified from the Rose Bowl in the first half due to targeting.

Sawyer hit Utah’s Rising as he scrambled for a 16-yard keeper. Rising was OK after the hit and the Utes scored on the following play.

Utah receiver Connor O’Toole was also disqualified for a targeting call in the second quarter, after attempting to tackle an Ohio State player and leading with the crown of his helmet on a kickoff.

Stroud threw a 52-yard pass to Smith-Njigba for a touchdown on the following play.

Three people who helped make the Rose Bowl Game what it is today were honored during the third quarter after being inducted into the Class of 2021 Rose Bowl Hall of Fame.

Anthony Davis played in three Rose Bowls for USC in the 1970s, leading the Trojans to victories in 1973 and 1975. Davis had 342 all-purpose yards and three touchdowns in three games. The USC legend, who won two national championships, was inducted into the USC Athletics Hall of Fame in 1999 and the College Football Hall of Fame in 2005.

Jim Delany was also inducted into the Rose Bowl Hall of Fame. Delany served as the Commissioner of the Big Ten Conference from 1989 to 2020. He also helped create the BCS and the College Football Playoff.

Ron Simpkins is a former Michigan linebacker who played in three straight Rose Bowls in 1977, 1978 and 1979. Although he never won a Rose Bowl, Simpkins was a standout on defense, who recorded a then-Rose Bowl Game record 16 tackles against Washington in 1978.