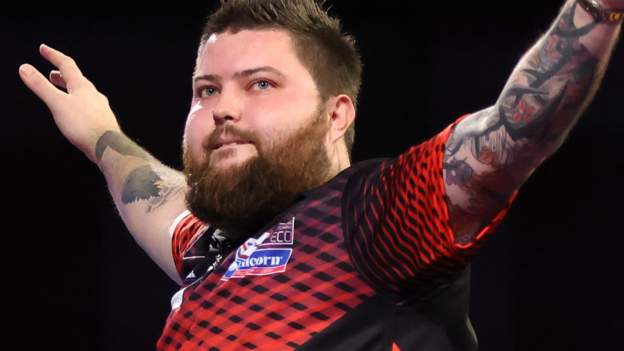 Reigning world champion Gerwyn Price has been knocked out of the PDC World Darts Championship quarter-finals by Michael Smith, despite throwing a nine-darter.

Smith, who won 5-4, and Peter Wright join James Wade and Gary Anderson in the semi-finals at Alexandra Palace, London.

Wright came back from 3-1 down to beat Callan Rydz 5-4 in another great match.

Wade and Anderson both won their quarter-finals on Saturday afternoon.

“I’m ecstatic that I won it. I’m over the moon,” said Smith.

“I’ve just got to keep myself focused and prepared right, and sleeping right, and then I’ll start thinking about playing and who knows… I could turn up tomorrow and play the worst darts I’ve played,” he added.

Smith will play Wade on Sunday in the first semi-final of the night and Wright faces Anderson in the second match in an all-Scottish semi-final.

The number one seed Price won the opening set against England’s Smith with a huge 109 average.

Smith won the next three legs on the spin, breaking Price’s throw with a 107 checkout in the second leg to level the match at 1-1.

Welshman Price took out a 125 and a 130 bullseye finish to win the third set. But despite throwing his first televised nine-darter in the fourth set, 2019 world championship runner-up Smith averaged a massive 121.33 to win the set and level the match at 2-2.

Both players broke each other’s throw in the fifth set but it was the three-time Grand Slam champion Price who threw a 108 to break Smith’s throw again and win the set.

The match was briefly stopped in the eighth set as Price spoke to the referee about off-putting noises from the crowd on his throw and Price twice missed match darts to win.

Smith took the next two sets to make his second world championship semi-final.

In the first match of the evening, Rydz, 23, from Bedlington showed no nerves on the big stage at Ally Pally, throwing an impressive 152 checkout to win the opening leg and winning the first two sets of the match, throwing four 100+ checkouts in the process.

The 2020 world champion Wright came back to win the third set and Rydz took the fourth set to lead 3-1.

Wright threw a great 140 checkout to win the next leg and went on to win the fifth set with an 11-darter.

In a super sixth set, second seed Wright almost threw a nine-darter in the third leg, missing the final double but won the leg with 10 darts.

Rydz came straight back with a 141 checkout to level the set but a composed Wright took out a 96 under pressure with Rydz waiting on 20, to level the match at 3-3 and then won the seventh.

Wright levelled the match at 4-4 and broke Rydz’s throw in the deciding leg to book his spot in the last four.

The second quarter-final was a much closer contest, with two-time world champion Anderson overcoming Luke Humphries 5-2 in a brilliant battle.

It was all square after four sets when Humphries drew level at 2-2. Scotland’s Anderson, 51, broke Humphries’ throw in the last leg of the fifth set to lead 3-2 and returned after the break with a 148 checkout to hold his throw and win the next set.

Find out how to get into darts with our special guide.

In his third World Championship quarter-final, Humphries had chances to break Anderson and fought back in the seventh set to lead 2-1 in legs.

However, Anderson threw a 108 finish to hold his throw and make it 2-2.

Humphries just missed the bull for a 170 checkout to take the set and missed another two darts at a double, with Anderson taking advantage to check out with 80 needed to seal the win.

After his victory on Saturday, Wade will make a fourth World Championship semi-final appearance and his first in nine years.

The fifth seed has lost only one set on his way to the semi-finals, in his round two victory over Maik Kuivenhoven.

The UK Open Champion was handed a walkover in round three as Vincent van der Voort was forced to withdraw because of a positive Covid-19 test.