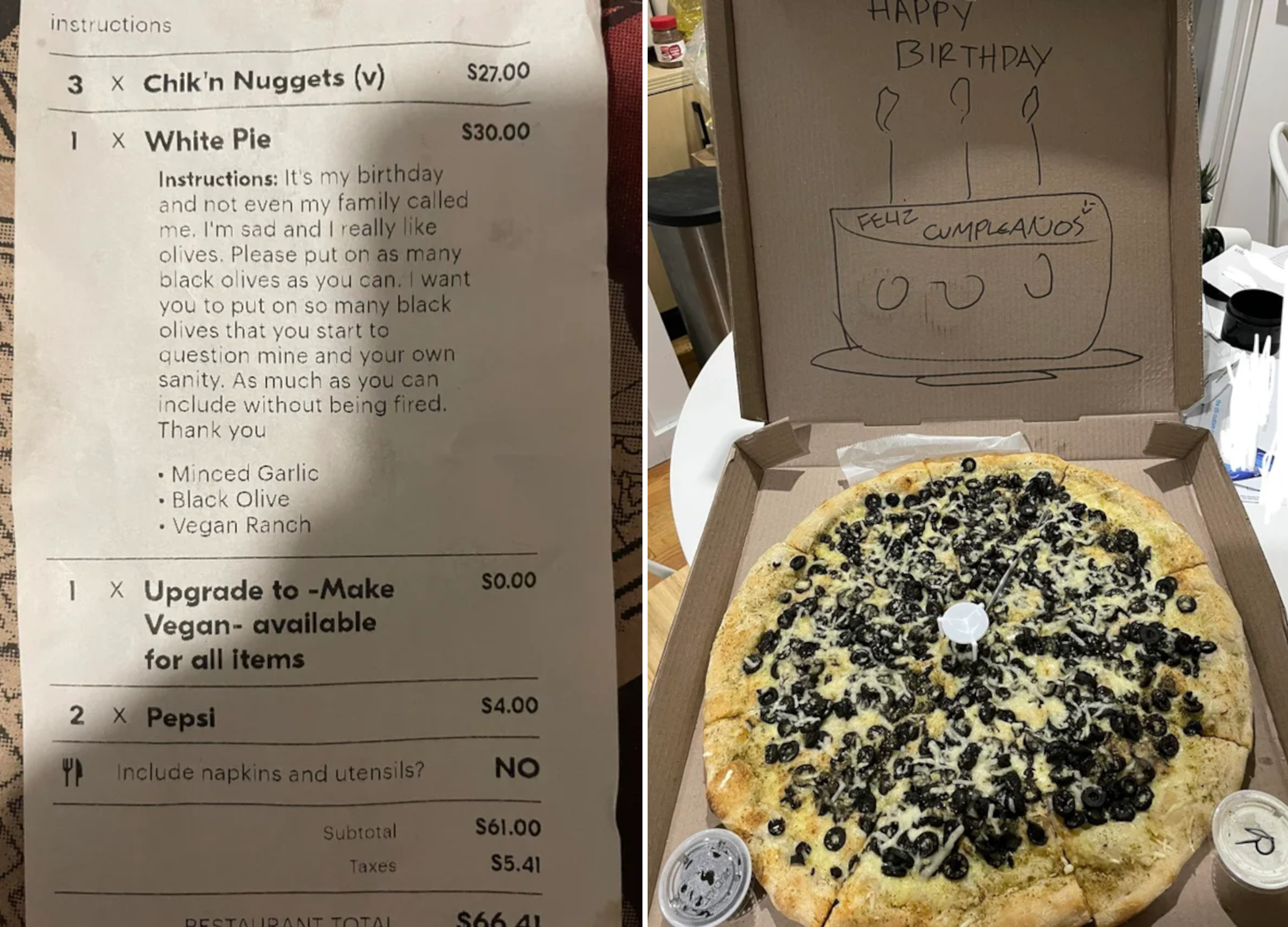 The internet has praised a New York pizza restaurant for honoring a man’s unusual birthday request after he shared the outcome on Reddit.

Jason, who lives in New York City, posted the story on Reddit’s popular r/MadeMeSmile forum under the username u/Jmklein17, where it has received over 95,000 upvotes.

He wrote: “I had a c***py birthday but my local pizza place had my back,” and shared a picture of his order receipt and the pizza he received.

As part of his birthday order, Jason left a special instruction that read: “It’s my birthday and not even my family called me. I’m sad and I really like olives. Please put on as many black olives as you can. I want you to put on so many black olives that you start to question mine and your own sanity. As much as you can include without being fired. Thank you.”

He then shared the pizza in a box with a hand-drawn birthday message and an impressive amount of black olives.

Jason told Newsweek: “[I] didn’t get any birthday wishes from my friends or family so I ordered myself a pizza that was admittedly way too expensive. I wasn’t sure what to expect, but they really went above and beyond on the pizza—even gave me an extra container of olives on the side in case it wasn’t enough. It was very sweet and definitely made my day a little better.”

The kind actions by Norbert’s Pizza in Brooklyn, NYC delighted Reddit users who headed to the comments to share their thoughts.

A further comment read: “Happy birthday OP, from one vegan olive fanatic to another.”

Another user shared their experience of unusual orders: “I’ve worked a ton of pizza jobs, and this is the kind of s*** I lived for. It’s easy to get lost in the monotony, but getting an opportunity to cheer up a stranger is always a joy. Plus, it’s fun to be a little creative with box art. I remember every single instance of people asking for weird custom stuff like this. Just wanted you to know you made their night as well.”

Jason explained that an earlier Reddit post requesting a custom order had inspired him. On May 4, user u/NotoriousTom shared how he requested “as many pickles as you can without getting fired,” gaining viral attention too, with more than 21,000 upvotes.

“I wanted to ask something similar to see what their response would be, and they definitely delivered,” said Jason: “I talked to the guy who posted it originally and we both think it’s hilarious how both posts got so big. Hopefully, we’ve inspired some other people to make some of their own orders with similar wording, maybe even start a trend, who knows!”

Elsewhere online, another pizza has sparked debate after Reddit users branded it “criminal.”