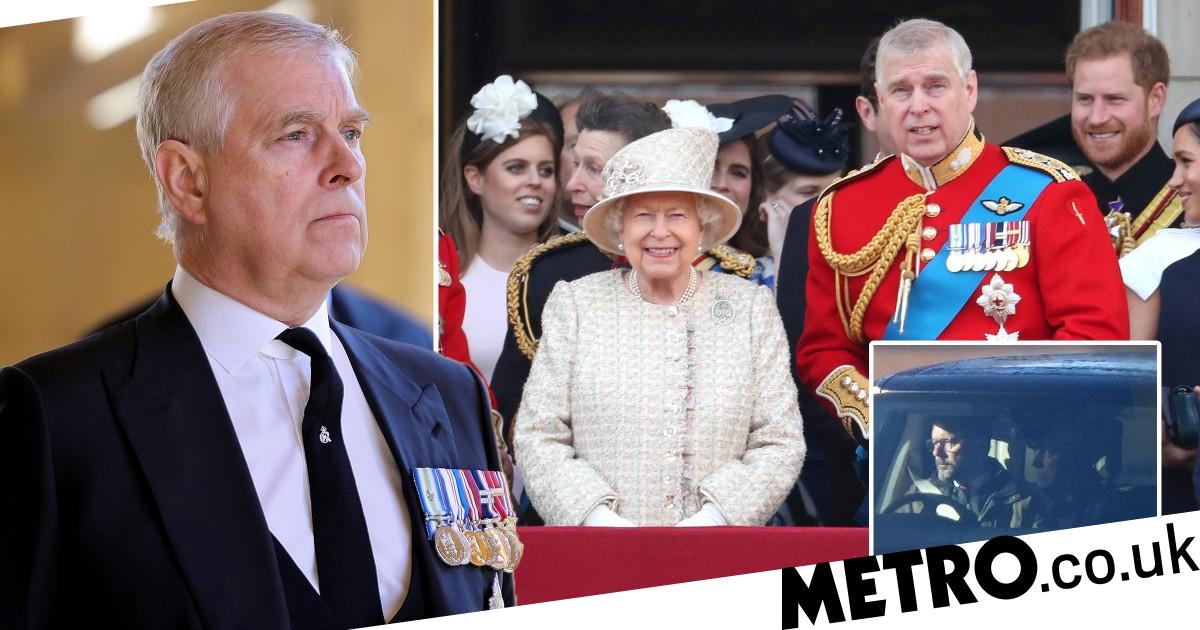 Prince Andrew has had all of his military titles and royal patronages taken away,with the Queen’s ‘approval and agreement’.

The Duke of York is defending a civil sex abuse lawsuit in the US ‘as a private citizen’, a statement released by Buckingham Palace today said.

A royal source has claimed he will no longer use the style ‘His Royal Highness’ in any official capacity.

All of his roles will be redistributed to other members of the Royal Family and will not be returned to him, it’s claimed.

It comes after Virginia Giuffre alleged the Queen’s second son sexually abused her on three occasions while she was 17.

Andrew has strongly denied the accusations and previously claimed to have no recollection of meeting his accuser.

More than 150 veterans had joined forces to write to Her Majesty and demand Andrew was removed from the honorary military positions earlier this week.

It’s understood the decision followed talks among senior members of the Royal Family – including his mother, the Queen, his brothers Prince Charles and Prince Edward and his sister, Princess Anne.

What were Prince Andrew’s military roles and royal patronages?

A number of charities cut ties with the Duke of York as he stepped back from royal duties in 2019.

But he is still listed on the Royal Family website as being a patron or member of roughly 100 organisations, including hospital trusts and schools.

• Colonel of the Grenadier Guards

• Deputy colonel-in-chief of the Royal Lancers

• Colonel-in-chief of the Royal Irish Regiment

• Colonel-in-chief of the Yorkshire Regiment

• Commodore-in-chief of the Fleet Air Arm

He will continue to not undertake any public duties after first stepping back in November 2019, the palace confirmed tonight.

But he remains in the line of succession to the throne and, as such, is still a Counsellor of State.

In the event Her Majesty cannot undertake her official duties as sovereign on a temporary basis due to illness or absence abroad, two or more Counsellors of State are appointed by Letters Patent to act in her place.

As a former member of the armed forces, the duke, who served in the Royal Navy, was by convention promoted in line with his still-serving peers and made Vice Admiral by the Navy on his 55th birthday in 2015.

He was due to be promoted to Admiral on his 60th birthday in 2020, but asked to defer this after stepping down from public duties.

Andrew had hoped the case would be stopped in its tracks after arguing Ms Giuffre signed away her right to sue under the terms of a settlement with paedophile billionaire Jeffrey Epstein.

However, it looks set to continue towards a trial after a judge rejected this attempt on Wednesday.

The royal himself could be forced to testify in front of a jury, whether in person or via video link.

There is also the prospect his daughters’ princesses Beatrice and Eugenie and wife Sarah, Duchess of York may be called to give evidence.

But the dad-of-two could raise £10 million from the sale of his Swiss chalet to settle the claims out of court, it has been reported.

Ms Giuffre’s lawyer has indicated the alleged victim wants to be ‘vindicated’ by the legal process and is not motivated by reaching a ‘purely financial settlement’.

She claims she was sexually abused by Andrew at convicted sex offender Ghislaine Maxwell’s home in London in 2001.

The Australian-American was also targeted at Jeffrey Epstein’s New York mansion and his private island in the US Virgin Islands, court documents allege.

A source close to the duke said he would ‘continue to defend himself’ against Ms Giuffre’s allegations following the judge’s decision to dismiss his legal team’s attempt to have the case thrown out.

The source said: ‘Given the robustness with which Judge Kaplan greeted our arguments, we are unsurprised by the ruling.

‘However, it was not a judgment on the merits of Ms Giuffre’s allegations. This is a marathon not a sprint and the duke will continue to defend himself against these claims.’