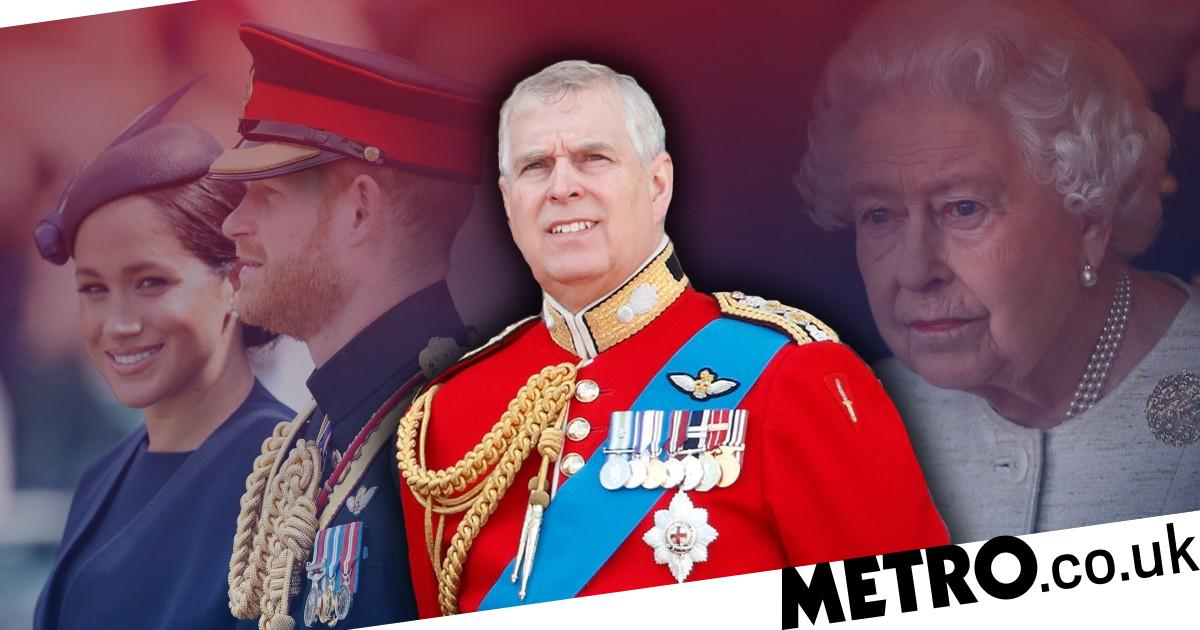 Prince Andrew is the third senior royal in two years to stop using his HRH style as the monarchy’s troubled times show no sign of abating.

The Duke of York is following in the footsteps of the Duke and Duchess of Sussex who dropped their HRH styles in 2020 after quitting their roles as working royals in the Megxit saga.

Former BBC royal correspondent Peter Hunt said: ‘This is what a sacking looks like when you’re ninth in line to the British throne.’

Writing for The Spectator, Mr Hunt said: ‘Prince Andrew has been well and truly cut adrift. By his only family.

‘From birth, he was styled His Royal Highness. He will go to his grave unencumbered by it.

‘The removal of the style HRH, at the age of 61, will hurt a son of the Queen who doesn’t wear his royal status lightly.’

Like Harry and Meghan, Andrew retains his title but will not use it in any official capacity.

He was born second in line to the throne in 1960 and was automatically His Royal Highness and a prince, according to rules set out by King George V in 1917.

His mother gifted him his dukedom on his wedding day and is unlikely to remove it at this stage, if at all, but much depends on the outcome of the civil sexual assault case he is facing.

The York dukedom is dear to the monarch, having been held previously by her parents, George VI and the Queen Mother, and Andrew is often dubbed her so-called ‘favourite son’.

Mr Hunt added: ‘The Windsors could have waited for this civil action to run its course.

‘The fact they haven’t shows just how much Prince Andrew, and his repeated failures of judgment, was toxifying their brand in the year of the monarch’s Platinum Jubilee.’

Andrew’s status as a member of the royal family is in tatters after the Queen stripped him of his honorary military roles and he gave up his HRH style in a dramatic fallout from his civil sex case.

The decision represents the duke’s complete removal from official royal life, and an attempt to distance the monarchy from Andrew, who was once second in line to the throne as the spare to the heir, in the year of the Queen’s Platinum Jubilee.

Here is the list of the 12 honorary military roles which the Duke of York has returned to the Queen:

– Colonel of the Grenadier Guards

– Colonel-in-chief of the Royal Irish Regiment

– Commodore-in-chief of the Fleet Air Arm

– Colonel-in-chief of the Yorkshire Regiment

– Colonel-in-chief of The Royal Highland Fusiliers Of Canada

– Colonel-in-chief of the Princess Louise Fusiliers (in Nova Scotia, Canada)

Like Harry, Andrew remains in the line of succession, and is also still a Counsellor of State – although it is unlikely he would ever be called to perform such a role.

In the event the Queen cannot undertake her official duties as sovereign on a temporary basis due to illness or absence abroad, two or more Counsellors of State are appointed by Letters Patent to act in her place.

The role of Counsellor of State is undertaken by any spouse of the monarch and the next four adults in the line of succession, currently the Prince of Wales, the Duke of Cambridge, Harry and Andrew.

The duke, although he has lost his honorary military roles and royal patronages, still holds his military rank of Vice Admiral.

As a former royal member of the armed forces who served in the Royal Navy, he was by convention promoted in line with his still-serving peers and made Vice Admiral by the Navy on his 55th birthday in 2015.

He was due to be promoted to Admiral on his 60th birthday in 2020 but asked to defer this after stepping down from public duties.

Diana, Princess of Wales had her HRH style completely removed.

The abdicated Edward VIII became the Duke of Windsor and finally married American divorcee Wallis Simpson while in exile in France in 1937, and none of the royal family attended.

But he kept his HRH style.

A Letters Patent by his brother, the new King George VI, decreed that Edward ‘having been born in the lineal succession to the Crown’ should be ‘entitled to hold and enjoy for himself only the style title or attribute of Royal Highness’.

Mrs Simpson became the Duchess of Windsor, but was never permitted to adopt the style of an HRH, with George VI’s Letters Patent forbidding it.