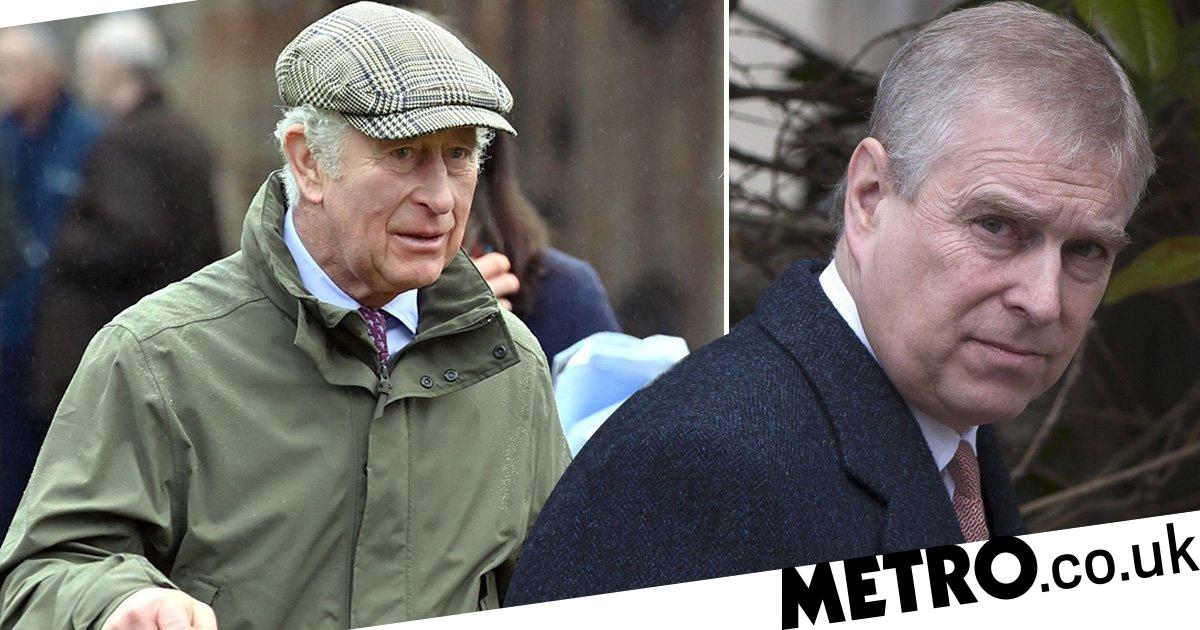 Prince Charles brushed aside questions about his exile brother Prince Andrew amid claims he played a key role in stripping him of his military and HRH titles.

The Prince of Wales refused to speak about the crisis engulfing the Royal Family on a visit to Scotland today.

Sky News correspondent James Matthews asked: ‘Can I ask your view on your brother’s position?’.

But Charles ignored him, choosing instead to speak to individuals impacted by the devastation caused by Storm Arwen in late November.

Prince Andrew has had all of his military titles and royal patronages taken away yesterday with the Queen’s ‘approval and agreement’.

The bombshell decision came after a US judge ruled the Duke of York should face a civil trial over allegations he sexually assaulted Virginia Roberts Giuffre when she was 17.

Ms Giuffre alleges that she was made to have sex with Andrew on three occasions in 2001 and while she was the victim of a trafficking ring orchestrated by billionaire peadophile Jeffry Epstein and his girlfriend Ghislaine Maxwell.

On Wednesday Andrew lost a bid to get the case thrown out.

He will now be fighting it as a ‘private citizen’ after effectively being cast out of the Royal Family by being stripped of all his titles and patronages.

Charles and his son William are understood to have been ‘instrumental’ in the move to force him out, the Daily Mail reports.

Palace sources said the ‘ruthless and swift’ decision had been ‘widely discussed’ within the Royal Family in the run up to the judge’s decision.

‘This is about the survival of the institution at all costs. Always has been and always will be,’ a senior palace source said.

Prince Charles is said to have spoken to his mother by phone from Scotland, where he is in residence, following the judgment against his brother.

And Prince William was at Windsor Castle on Wednesday to conduct an investiture on behalf of his grandmother, so would have spoken to her personally as well.

Andrew is said to have been summoned for a 90-minute meeting with his mother at Windsor Castle on Thursday.

A well-placed palace source said the Queen and her advisers had decided to follow ‘the same model’ of effective banishment with Andrew as she had with Harry and Meghan, when they quit as senior members of the royal family.

However, insiders said it would not have been an easy decision for the Queen, given Andrew’s reputation as her so-called favourite son.

On source close to the 95-year-old monarch said: ‘She has the ability, when push comes to shove, to know what is best for the institution and will act in her role as head of state, not a mother.

‘She loves Andrew and this doesn’t mean he is no longer her son. But a decision had to be made as it was overshadowing everything the family did and her forthcoming platinum jubilee.

‘Everyone will be feeling very relieved he has finally been cut adrift. It may even help him to have more clarity in fighting the case.’

In brutal two line statement last night, Buckingham Palace said: ‘With the Queen’s approval and agreement, the Duke of York’s military affiliations and royal patronages have been returned to the Queen.

‘The Duke of York will continue not to undertake any public duties and is defending this case as a private citizen.’

The duke, who was stripped of public duties after his infamous carcrash Newsnight interview in 2019, now faces a jury trial in the autumn over Miss Roberts’ claims.

A source close to him said last night: ‘Given the robustness with which Judge Kaplan greeted our arguments, we are unsurprised by the ruling.

‘However, it was not a judgement on the merits of Ms Giuffre’s allegations.  This is a marathon not a sprint and the Duke will continue to defend himself against these claims.’

Andrew’s legal team are expecting to soon find out which members of his family will be asked to give evidence under oath, The Times reported.

Ms Giuffre’s lawyer David Boies has been described as the ‘great deposition taker’ in modern America, and has already indicated he might question Andrew’s ex-wife Sarah, the Duchess of York, and her daughters Princess Beatrice and Eugenie.

They are likely to be quizzed about Andrew’s alibi for the night in 2001 when Ms Giuffre, said she slept with the prince in Ghislaine Maxwell’s home after they had been dancing together at Tramp, a high-end London nightclub.

However, Andrew’s legal team is still said to be pursuing every legal avenue to stop the case from going to trial.

It was reported yesterday that the Duke of York could raise £10m from the sale of his Swiss chalet to settle the case out of court.

However Ms Giuffre is said to be determined to see the case go to trial.

Breaking her silence after the judge’s verdict, she wrote on Twitter early on Friday morning: ‘I’m pleased with Judge Kaplan’s ruling yesterday that allows my case against Prince Andrew to go forward.