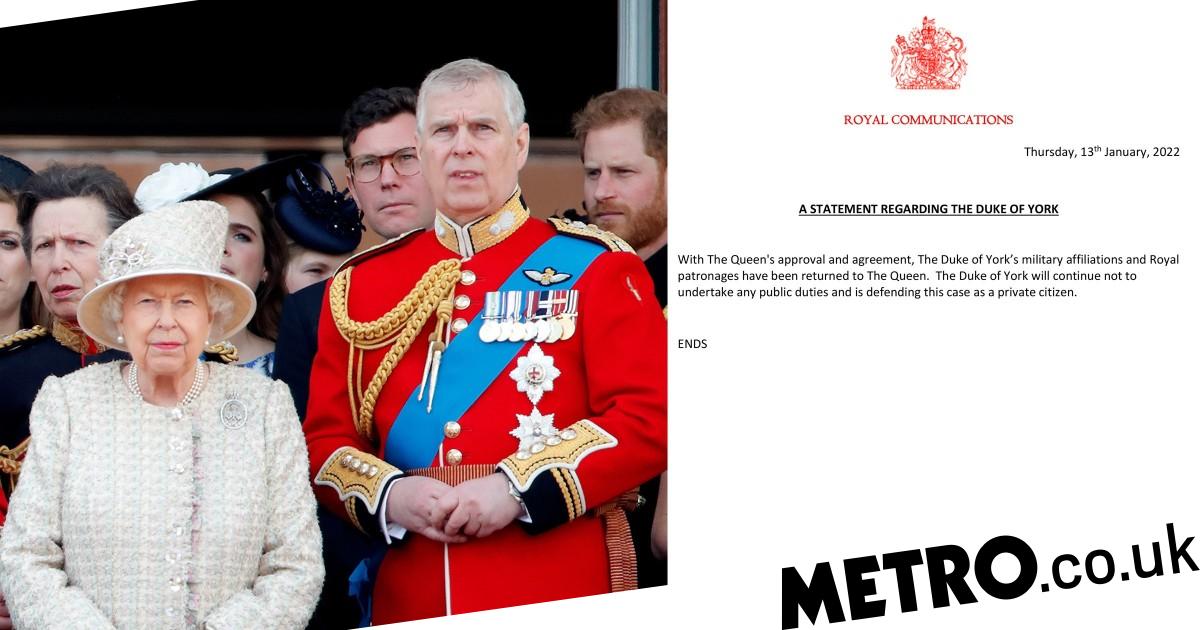 The Queen, Prince William and Prince Charles must have been ‘absolutely furious’ with Prince Andrew to strip him of his titles, a royal biographer has said.

A journalist who specialises in royal commentary, Angela Levin, has spoken out about how unprecedented the Palace’s reaction has been to a New York judge ordering Andrew to face sex allegations in a civil trial.

‘Whatever he may or may not have done he certainly was a friend of Epstein and invited him to parties, royal parties when they knew he had been accused of having relationships with underage girls.

‘So there’s no doubt about that. I would imagine that this time the Queen would also listen to her aides. But she also has strong views so if she didn’t want to do it, she wouldn’t have done it – she obviously felt they’d crossed a red line.’

The Palace yesterday released a statement saying Andrew must face his trial as a ‘private citizen’, stressing the decision was made ‘with the Queen’s approval and agreement’.

The Duke of York has long been accused of sexually assaulting Virginia Giuffre at 17 – when Andrew was friends with convicted paedophile Jeffrey Epstein.

Andrew has always vehemently denied these allegations and claims he cannot remember ever meeting Virginia.

Things have come to a head recently because a New York judge ruled Andrew should answer to the claims at a civil trial.

This prompted the Royal Family to sensationally strip the Queen’s second son of his military medals and royal patronages.

But Ms Levin also believes mounting pressure from veterans, who did not want to be associated with Andrew, forced the Queen to react ‘very fast’.

More than 150 ex-military personnel wrote to the monarch saying Andrew was ‘unfit to serve’.

In the letter released by the anti-monarchy group, Republic, earlier on Thursday, former members of the Royal Navy, RAF and Army said his continued affiliation with the armed forces was causing ‘upset and anger’.

The signatories said ‘were this any other senior military officer it is inconceivable that he would still be in post’ and pleaded with the monarch: ‘Please do not leave it any longer.’

Andrew will continue to not undertake any public duties after first stepping back in November 2019, the palace confirmed tonight.

But he remains in the line of succession to the throne and, as such, is still a Counsellor of State.

In the event Her Majesty cannot undertake her official duties as sovereign on a temporary basis due to illness or absence abroad, two or more Counsellors of State are appointed by Letters Patent to act in her place.

A source close to the duke said he would ‘continue to defend himself’ against Ms Giuffre’s allegations following the judge’s decision to dismiss his legal team’s attempt to have the case thrown out.

The source said: ‘Given the robustness with which Judge Kaplan greeted our arguments, we are unsurprised by the ruling.

‘However, it was not a judgment on the merits of Ms Giuffre’s allegations. This is a marathon not a sprint and the duke will continue to defend himself against these claims.’