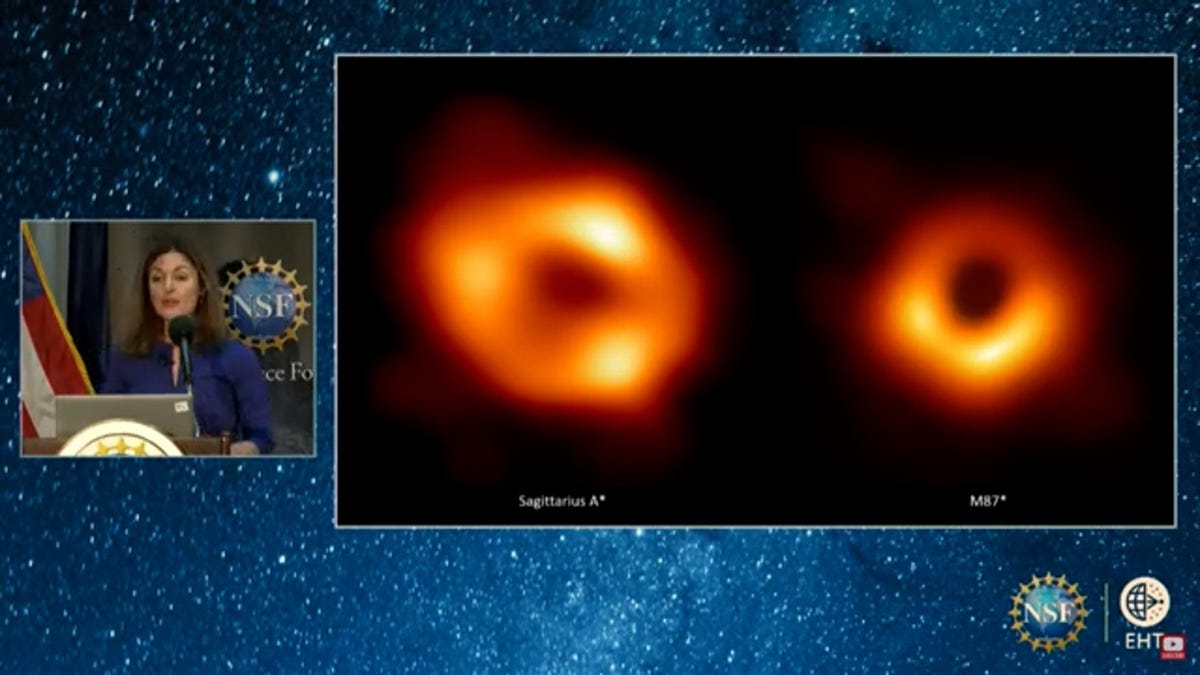 Speaker 1: Good morning everyone. And thank you for being here while we share with you our exciting new results about our galaxy, the Milky way, Our home in this universe, what fills our night sky on a dark summer night At its heart towards the constellation. Sagitarius is Sagitarius a star, the super massive black hole suspected to [00:00:30] reside there. A source that has been a focus of intense astronomical studies for decades. Observations of stars orbiting around around it reveal the presence of an object that is very massive. 4 million times the mass of our son, but also very faint For me personally. I met it 20 years ago and have loved it [00:01:00] and tried to understand it since, but until now we didn’t have the direct picture confirming that Saja star was indeed a black hole Today. The event horizon telescope is delighted to share with you the first direct image of the gentle giant in the center of our galaxy. Sagitarius a star. [00:01:30] This image shows a bright ring surrounding the darkness, the telltale sign of the shadow of the black hole light escaping from the hot gas swirling around the black hole appears to us as the bright ring light that is too close to the black hole,

Speaker 1: Close enough [00:02:00] to be swallowed by it. Eventually crosses its horizon and leaving behind leaves behind just the dark void in the center. Getting to this image, wasn’t an easy journey. It was,

Speaker 1: Me. It was one of building, a worldwide telescope array and a global collaboration. One of getting and process, Excuse me, [00:02:30] One of getting and processing petabytes of data collected from those telescopes Of imaging algorithms, more complex than many that have ever been developed. What made it extra challenging was the dynamic environment of Saja star, a source that verbal and Al as we looked at it, [00:03:00] and the challenges of looking not only, um, something is advancing the slides without, Can you please go back to the earlier slides?

Speaker 1: Let’s see if this will work. What made it extra [00:03:30] challenging was the dynamic environment of SJA star, a source that verbal then gurgled as we looked at it and the challenges of looking not only through our own atmosphere, but also through the gas clouds in the disc of our galaxy, towards the center, It took several years to refine our image and confirm what we had, but we prevailed The HD collaboration has indeed been hard at work imaging, black [00:04:00] holes with exquisite resolution using new techniques. In 2019, we revealed the very first such image that of the super massive black hole in the M 87 galaxy That black hole is 1500 times more massive making its horizon 1500 times larger, but it is also 2000 [00:04:30] times further away from us. This makes the two images appear very similar to us when we gaze at them in the sky. But the two black holes couldn’t have been different from each other in practically every other way. The one in M 87 is accumulating matter at a significantly faster rate than, than Saj star, but perhaps more importantly, the one in M 87 launches a powerful jet that [00:05:00] extends as far as the edge of that galaxy, our black hole does not.

Speaker 1: And yet when we look at the heart of each black hole, we find a bright ring surrounding the black hole shadow. It seems that black holes like donuts. I wish I could tell you that second time is as good as the first when imaging black holes, but that wouldn’t be true. It is actually [00:05:30] better. Now we know that it wasn’t a coincidence. It wasn’t some aspect of the environment that happened to look like the ring that we expected to see. We now know that in both cases, what we see is the heart of the black hole. The point of no return. These two images look similar because they’re the consequence of fundamental forces of gravity space time, the fabric of the universe warps around [00:06:00] black holes in exactly the same way, regardless of their mass or what surrounds them. This is what we had expect hope to find given the predictions of Einstein’s theory of general relativity. And it is exactly because of this fact that we are able to use these new observations, the image of S J star to perform one of the strongest tests of general relativity to date. What was remarkably helpful [00:06:30] to us when performing this test was the amount of information we already had abouts J star before our observations, the astronomy community has monitored for decades. The motion of stars around the dark center of the galaxy by tracing these orbits. We have come to know the mass of the black hole with extreme precision decision

Speaker 1: That allowed us to make a prediction for how big the image and [00:07:00] the black hole shadow should be. If Einstein’s theory is right with no wiggle room and no parameters to adjust, The only way to change the size of the shadow is if we change the theory. And what we found was that our image was in very close agreement with theoretical predictions. These observations leave us very little freedom to change Einstein’s theory of gravity. [00:07:30] Now we have two laboratories in the sky, M 87 and SJA star for exquisite tests of extreme environments. We learned so far that we understand gravity pretty well, But as you will hear later, as sophisticated as our simulations, are we still, we discovered that we still have a waste to go with modeling their turbulent environments.