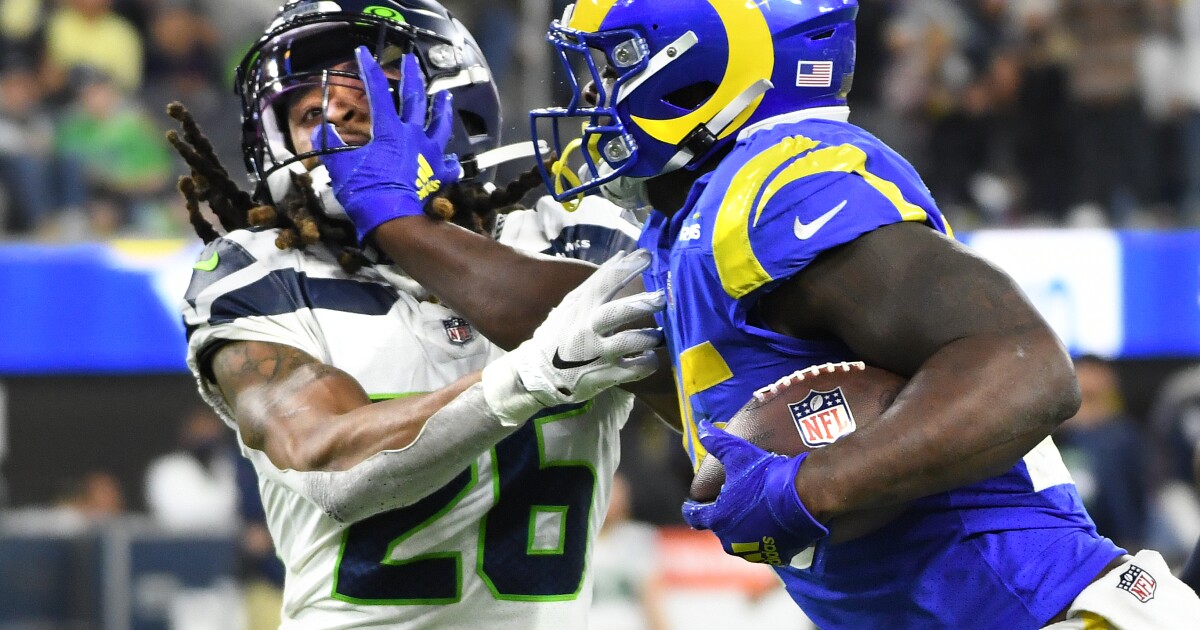 He is mild-mannered, a self-described “smiler” who prefers to listen.

When Sony Michel carries the ball for the Rams, the running back mostly hears sounds of frustration from opposing defensive players.

It played out in a similar way throughout his college career at Georgia and during much of his first three NFL seasons with the New England Patriots. Most recently in the last four games for the Rams.

Since supplanting Darrell Henderson as the starter, Michel has averaged 22 carries and 105.8 yards rushing per game. Not coincidentally, the Rams have won four games in a row and clinched a playoff spot.

If the Rams (11-4) defeat the Baltimore Ravens (8-7) on Sunday at M&T Bank Stadium, and the Arizona Cardinals lose to the Dallas Cowboys, the Rams will win their third division title in five seasons under coach Sean McVay.

McVay’s offense leans heavily on quarterback Matthew Stafford and record-setting receiver Cooper Kupp. Yet the Rams are winning of late because of Michel’s performances, which include innumerable second-effort gains.

“I’m thankful I don’t play defense,” Kupp said, “because I’d imagine every time it seems like he’s hitting people he ends up with his head facing our end zone.

“There’s not a whole lot of times where he’s facing backwards or falling backwards — a lot of falling forwards and playing with a physicality that I think is pretty special.”

“When you’re violent runners and you just keep your feet moving you should be able to gain extra yards after contact,” he said.

Michel’s 5-foot-11, 215-pound frame suits the physical, so-called downhill running style that over time punishes would-be tacklers at and beyond the line of scrimmage.

Rams defensive lineman A’Shawn Robinson played against Michel in college, before the Patriots selected Michel in the first round of the 2018 NFL draft. Michel, 26, has since added muscle and strength, Robinson said. That provides Michel with “a little more weight to give him a little bit more power, a little bit more muscle mass to just tote it even more, to run through people’s faces even more,” Robinson said.

“And that’s what you’ve been seeing,” he said, “You see him run through people’s faces.”

So, when Michel carries the ball 20 times or more, he wears out defensive linemen.

To make sure he was clearly understood, Robinson then provided sound effects.

It did not take Michel long to recognize the value of second effort. He adopted his style “the moment I started playing football,” he said.

As his carries mount, can he sense fatigue from the defense?

The Rams experienced that firsthand in Super Bowl LII. Michel rushed for 94 yards and a touchdown in 18 carries in a 13-3 Patriots victory.

Last summer, after Cam Akers suffered an Achilles injury on the eve of training camp, and Henderson’s durability issues continued to be cause for concern, the Rams traded for Michel.

For most of the season, he provided solid backup performances for Henderson. He moved into the starting lineup after Henderson suffered a thigh injury.

As Michel prepared to play against the Jacksonville Jaguars, McVay made a noticeable shift to a run-first mentality. He deployed an extra offensive lineman at tight end so Michel could take advantage of “heavy” formations.

Last Sunday, Michel rushed for 131 yards and touchdown in 27 carries in a 30-23 victory over the Minnesota Vikings. It was his most rushing yards in a game since amassing a career-best 133 yards against the New York Jets during his rookie season.

“There’s certain players that they bring a toughness to your unit,” McVay said. “Sony’s done that.”

The offensive line’s play has been the key to his success, Michel said.

“I kind of feed off the offensive line’s energy,” he said. “Them coming back to the huddle like, ‘Ah, let’s get it. We got this play.’ Or, after a play, them picking me up.”

Michel said he gains most of his inspiration from fellow Rams running backs, including Akers, who was activated to the roster before the game against the Vikings. Akers is listed as questionable for Sunday’s game and is not expected to play until the season finale against the San Francisco 49ers or the playoffs.

Michel said he was happy “to be another piece to the puzzle,” on and off the field, for a team trying to win a Super Bowl.