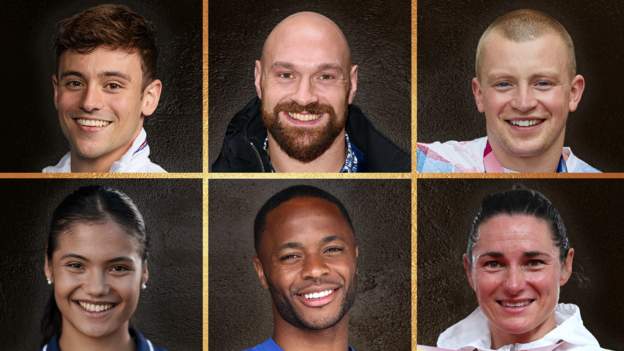 A shortlist of six contenders has been announced for the 2021 BBC Sports Personality of the Year award.

Voting will be open during the show on BBC One on Sunday, 19 December.

The programme, filmed at Media City in Salford, will celebrate 12 months of incredible sporting action, which featured the Olympics and Paralympics.

The public can vote by phone or online on the night for the main award, with full details announced during the show.

Other awards to be announced include Young Sports Personality of the Year, Team and Coach of the Year, World Sport Star of the Year, Lifetime Achievement and Unsung Hero.

Who are the Sports Personality contenders?

At his fourth Games, Daley finally became an Olympic diving champion, alongside Matty Lee in the synchronised 10m platform event.

A household name since competing on the world stage as a schoolboy, the public has watched as he won major titles, shared his grief when he lost his father to cancer, and his joy when he married and later became a father.

Then aged 27, and 13 years after his Olympic debut, he claimed an emotional triumph at the Games in Tokyo.

He was twice knocked down himself in the fourth round before knocking out Wilder in a brutal contest to remain world champion.

It confirmed Fury’s status as one of the great heavyweights and the dominant force in the trilogy against Wilder, with the first fight in 2018 finishing in a controversial draw, before the British boxer won their second outing in 2020.

The champion’s father John later revealed Fury had undergone surgery on both elbows after suffering a serious injury before his second win over Wilder.

Peaty wrote his name into the history books once again as he powered to 100m breaststroke gold in Tokyo to become the first British swimmer to defend an Olympic title.

He blew away the competition to win Britain’s first gold medal of the Games.

It left Peaty with the 16 quickest times – this race was the fifth fastest – over the distance in history, and he remains the only swimmer to dip under 57 seconds with his 2019 world record.

A 44-year wait for a British women’s Grand Slam singles champion ended with Raducanu’s remarkable run to win the US Open.

She was the first qualifier in the Open era to win a Grand Slam title, sealing victory with a straight-sets win over Canadian Leylah Fernandez.

Raducanu, then 18, did not drop a set in the tournament as she became the youngest women’s Slam champion since Maria Sharapova won Wimbledon as a 17-year-old in 2004.

In the summer, while awaiting her A-level results, the teenager had emerged as a star at Wimbledon, defying her ranking of 338 to reach the fourth round before retiring from her last-16 match after suffering breathing difficulties.

Sterling shone as England progressed at Euro 2020 – reaching the final of a major tournament for the first time in 55 years before losing to Italy on penalties.

The Manchester City forward scored three goals at the tournament, including the opener during England’s historic win over Germany in the last 16.

Sterling was one of three England players, alongside defenders Harry Maguire and Kyle Walker, to be picked in Uefa’s team of the tournament.

He also scored 10 Premier League goals during the 2020-21 season as City won the title for the third time in fourth years.

A 17th Paralympic gold sealed Storey’s status as Great Britain’s most successful Paralympian of all time.

In Tokyo, Storey defended the women’s C4-5 road race title she has held since London 2012 to put her one gold ahead of previous record holder Mike Kenny.

Storey’s gold was her third of the Tokyo Paralympics – her eighth Games since making her debut in Barcelona in 1992 as a 14-year-old swimmer.

She also won the individual pursuit on the track before claiming time-trial gold as she took her overall Paralympic medal tally to 28.