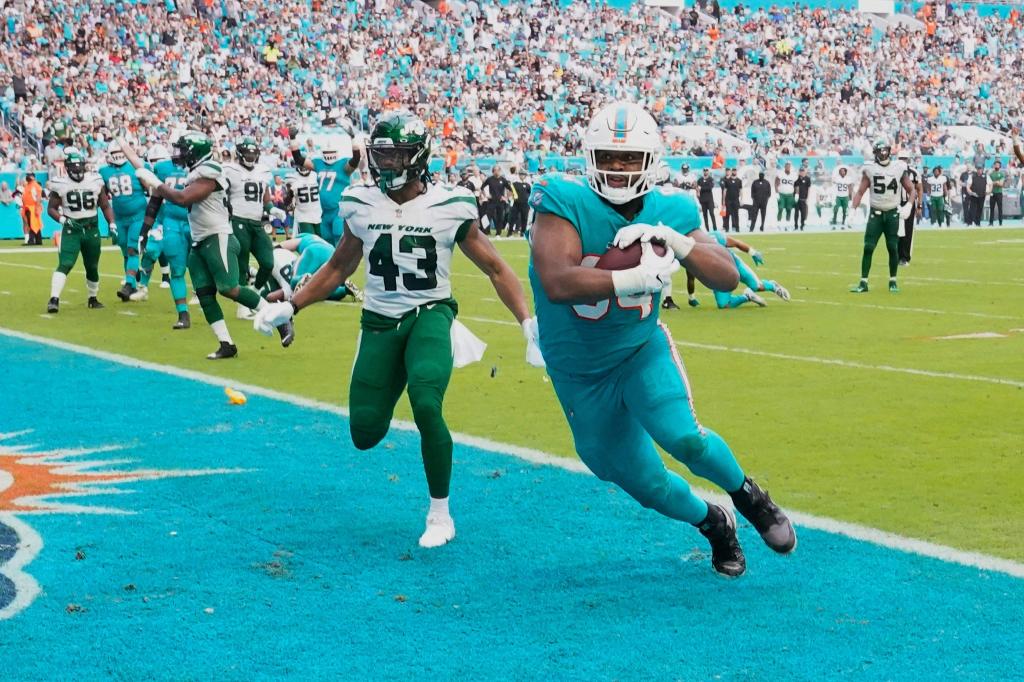 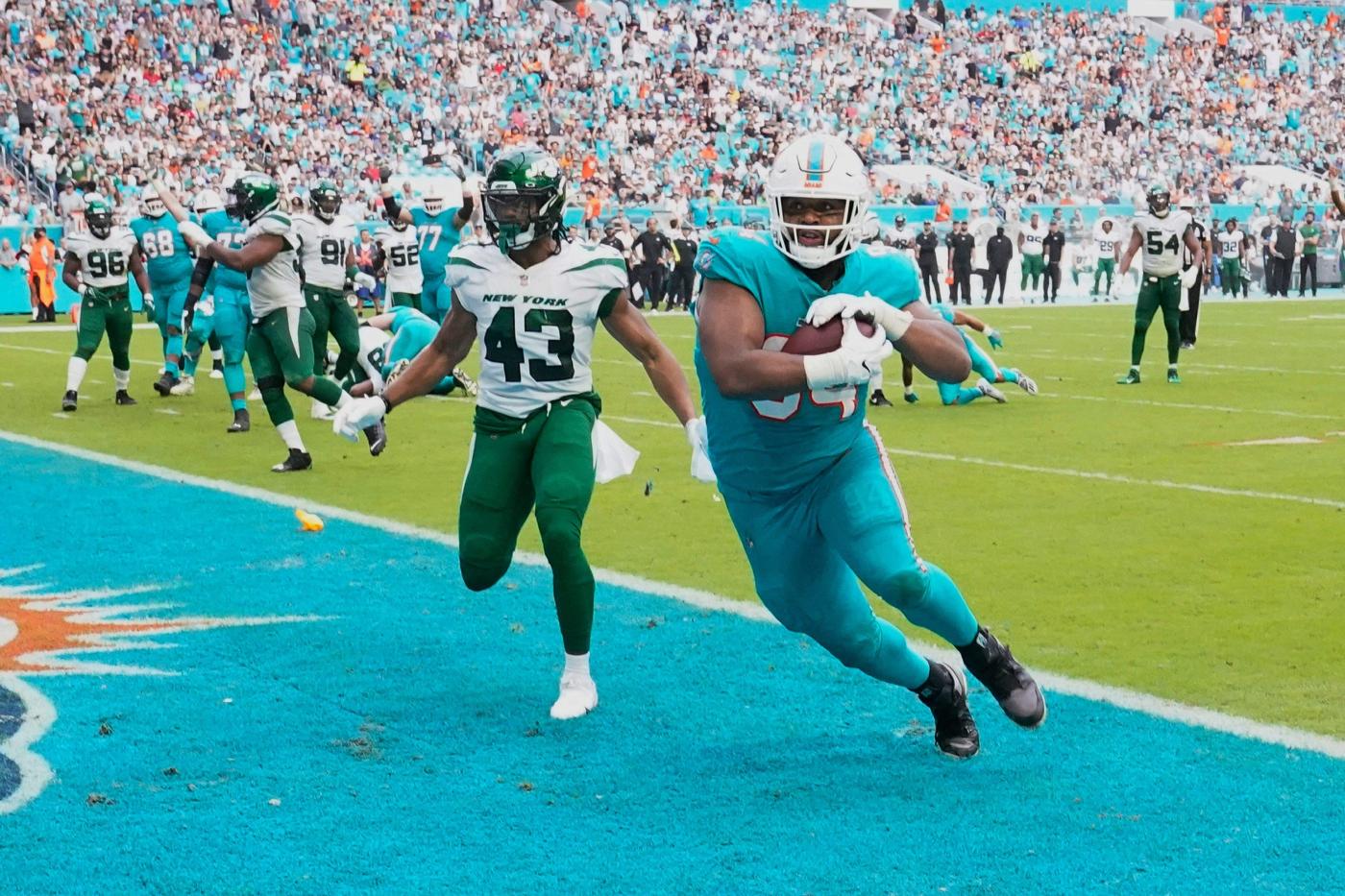 Here are 10 thoughts on the game:

1. Player of the game: Duke Johnson. He stepped in from the waiver wire and practice squad and broke his career high with 107 yards on 22 carries (previous career high was 78 yards in 2015 for Cleveland). He showed all the running problems aren’t just the offensive line. Considering Myles Gaskin was averaging 3.8 yards a carry, Johnson looked like a clear step up with a 4.9 yard average. Let’s not overdo this off this one Sunday: The Jets are the 29th ranked rushing defense (138 yards a game). But the Dolphins were the 31st-ranked rushing offense. By first grabbing Phillip Linsday off waivers (who got hurt) and now Johnson says the Dolphins realize they made a mistake at running back. Gaskins always seemed better suited in a James White, third-down role rather than a feature back. It doesn’t mean they need to use a first-round pick on running back. Look at the top five running backs entering Sunday: Jonathan Taylor, Joe Mixon, Dalvin Cook, Derrick Henry and Nick Chubb. The common denominator is they’re all second-round picks.

2. Tua Tagovailoa’s day. There was some good like the game-winning TD pass on a skinny slant on third down from the Jets’ 11 with 3:37 left that DeVante Parker made a good catch. OK, it wasn’t a great pass. But it’s a TD. There also was some OK. Them was one awful interception where Jets cornerback Bandon Echols returned it 20 yards for a game-tying Pick-6 with 7:51 to play. That was Tua’s second interception of the day against the Jets’ 31st-ranked defense. His good play in this recent stretch was underlined by avoiding errors. He had a couple to clean up this game. Overall, he completed 15-of-25 passes for 195 yards, two touchdowns and two interceptions.

3. Does anyone have more fun playing football than defensive tackle Christian Wilkins? He got a play to match his spirit Sunday. Fourth quarter. Tie game. Fourth-and-goal at the Jets 1. Wilkins is in as an eligible receiver on the line and caught a simple pass from Tua for what seemed like the winning touchdown to put the Dolphins up, 24-17. Wilkins then leaped into the front row for a Lambeau Leap South. He wasn’t done. He did a ground-burning worm dance on the field. Then some other pirouette on the ground. He might challenge Channing Crowder by the end of his career for the Dolphin who has the most fun playing the game.

5. You tip your hat to the Dolphins for a six-game winning streak. That’s not something many teams do — especially after starting 1-7. It tells of Brian Flores keeping the team together and giving the season a chance. And you don’t dismiss anything considering the Dolphins lost to the likes of Jacksonville and Atlanta on that starting schedule. But there’s a fine line to walk here between praise and reality. The Dolphins played against teams with a 25-53 record over those six games. They had one impressive win because of the opponent against Baltimore and one impressive win by score (33-10) against Carolina. Now comes a three-game stretch that will be more trying: at New Orleans, at Tennessee and New England at home.

* Brandon Jones got his fourth sack this year to lead all defensive backs.

* Crushing to see a player carried off on a stretcher. It was Jets’ safety Elijah Carter this game. Seems like it happens every game.

* That fake punt on fourth-and-inches near midfield in the fourth quarter. The snap bounced off Clayton Fejedelem, the short man. Jets recovered. Oy.

* Ah, yes, the draft worries. The Jets are battling for the No. 2 pick overall to get one the consensus top two players in the draft — edge rushers Aidan Hutchinson of Michigan or Kayvon Thibodeaux of Oregon.

7. Defensive tackle Zach Sieler is an unsung name who makes big plays for the Dolphins defense. On Sunday, he ran back and defended Wilson in the first half when there was return pass coming to the quarterback. Then, in the fourth quarter, with the Jets driving at the Dolphins’ 31-yard line, he strip-sacked Wilson. Emmanuel Ogbah came out with the fumble. That ended the Jets’ best chance to stay in the game.

8. Late in the second quarter, the Jets showed a glimpse of next-generation football play-calling. On third-and-15 from the Jets 20-yard line, Wilson threw over the middle 1 yard to Jamison Crowder. He had some space, but as the Dolphins defense converged threw backward toward the sideline and Braxton Berrios. That resulted in Berrios running 22 yards for a first down. It had the idea of a rugby pass in a football play. And just so you don’t think I was alone thinking it was an interesting play: Joe Namath tweeted: “That 3rd & 15 play was absolutely beautiful! Everything about it was terrific — the call, the execution. Beautiful.”

9. Stat of the game: The Jets have an 11-game losing streak in the AFC East, the longest since the league went to this divisional format (eight divisions) in 2002.