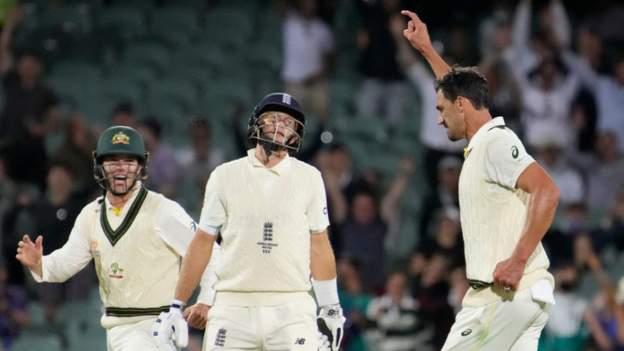 England are facing defeat in the second Ashes Test after captain Joe Root fell in the final over of day four against Australia in Adelaide.

Root edged behind off Mitchell Starc to what proved to be the last ball of the day, as England closed on 82-4.

It was a bitter blow to the hopes of the tourists, who need to bat out the final day for a draw, having been set a nominal 468 to win.

Root, unable to take the field at the start of the day because of injury, dug in for 67 balls for 24 and looked set to end unbeaten alongside Ben Stokes, who is three not out from 40.

England had lost opener Haseeb Hameed in the second over of their innings when he gloved a rising length ball from Jhye Richardson behind for a duck.

Dawid Malan was trapped lbw for 20 by Michael Neser and Rory Burns batted for 95 balls, only to edge Richardson to second slip for 34.

Earlier, despite losing three wickets for seven runs in a bizarre first session, Australia moved from 45-1 to 230-9 before declaring an hour before tea.

On a turning track and with the benefit of another session under the lights possibly to come on day five, the hosts look primed to take a 2-0 series lead.

England have looked destined for defeat in the game since collapsing on day three but had Root survived the last over there would have been slim hopes that a draw could be salvaged.

He has singlehandedly fought to keep England’s floundering batting line-up afloat this year, scoring 1,630 runs in 2021 – a record for an England batter and more than 1,000 any of his team-mates have accumulated.

But, late in the Adelaide night and with five balls of Starc’s over left to survive, he pushed onto the front foot outside off stump and offered a thin edge through to Alex Carey.

In the previous over he needed several minutes’ of treatment having been hit in the groin by Starc, the same place he had taken a blow without protection before play, which required him to go to hospital for a scan.

England fans will now have little faith a middle and lower order that has spent the year disintegrating repeatedly can save the game.

No batter remaining in the line-up has scored 40 or lasted more than 100 balls in the series but they now must save the Test.

Australia spinner Nathan Lyon is wicketless in the innings but will be a major threat on the final day, having beaten the bat again and again in the final session.

Hameed’s duck was the 13th by an England opener this calendar year, the most by any team in Test history.

In fairness he got a good ball from Richardson that kicked from a length to take his glove, but it was another sorry start by England to what was a monumental task.

His partner Burns has made six of those ducks, including one from the first ball of the first Test.

Burns’ innings on day four was more than double his previous highest score in the series so far (13) but when he poked at a ball which angled in and moved slightly away, it was snaffled at second slip by Steve Smith.

Malan, a rare highlight for England in this tour with scores of 82 and 80, had already been dropped at slip by Smith off Lyon when he was pinned in front by debutant Neser from round the wicket.

Starc and all-rounder Cameron Green impressed again while Richardson was much improved on the first innings.

Much of the day was a strange waiting game as Australia held off declaring until light had begun to fade in the day-night Test.

England’s wicketkeeper then dropped a far easier chance on the next ball, which would have seen Smith depart for a first-ball duck.

Smith was fortunate to survive an lbw review by the slimmest margin the very next ball but he then gloved Ollie Robinson down the leg-side for six soon after – Buttler this time taking another fine catch with his left hand.

England, bowling a fuller length and producing one of their best spells of the match, conceded only 14 runs in the first hour. That said, despite being 59-4, Australia were still well in command 296 runs ahead.

From there things took an even more strange turn when Robinson bowled three overs of off-spin with Root still off the field.

When Root returned after 90 minutes, runs started to flow as Labuschagne and Head, who was removed by a stunning Stokes catch, pushed Australia towards their declaration – both making 51.

He ended with his first two Test wickets, both catches off slogs, and Root claimed another two on a pitch that England must surely be regretting leaving out a front-line spinner.

‘Root is a huge wicket’ – reaction

“If Joe Root had still been there at the close, they would have said it was one of their better days of the series.”

Australia vice-captain Travis Head: “Root is a huge wicket, he is in fantastic form. I have a lot of sympathy for him – it wasn’t a great time to get hit.

“They’ve still got some quality players. Nathan Lyon will play a massive part, the ball is turning.”

England bowling coach Jon Lewis: “They will try to survive the day tomorrow to get ourselves out of this game with a draw. It’s a big ask I know.”