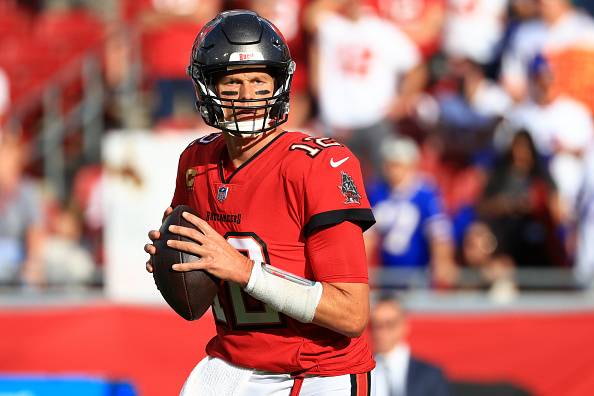 Tampa Bay Buccaneers quarterback Tom Brady had quite a week. He was named Sports Illustrated’s “Sportsman of the Year,” broke an unthinkable NFL record and extended another incredible record that he already owned.

He also tied another NFL mark he owns with Dan Marino. Not bad for a transplanted “Florida man.”

The Buccaneers needed overtime to beat the Buffalo Bills, 33-27, Sunday afternoon in Tampa. Brady tossed a 58-yard touchdown pass to Breshard Perriman for the game-winning score.

The score extended Brady’s all-time record against the Bills to 33-3. His 33 wins are the most by any quarterback against any single opponent. Who’s second? That would be Brady, who has 29 wins over the New York Jets. Brett Favre is next with 26 wins over the Detroit Lions.

With Brady’s touchdown pass to Perriman, he has now tossed 72 scoring strikes against the Bills. That’s tied for the most by a quarterback against a single opponent, tied with Marino’s 72 against the Jets and, um, Brady’s 72 against the Dolphins.

Brady earlier this week was named Sports Illustrated‘s “Sportsman of the Year” after guiding the Buccaneers to a Super Bowl win in February. The Buccaneers became the first team to ever win the Super Bowl in their home stadium, or even play in one for that matter. The Bucs were a wild card team that won three road games to get there. Brady and Tampa Bay beat three future Hall of Fame quarterbacks to accomplish it—Drew Brees, Aaron Rodgers and Patrick Mahomes.

Brady won six Super Bowl championships with the New England Patriots before becoming a free agent and signing with Tampa Bay during the 2020 offseason. He needed just one season to win the title there.

The Tampa Bay Buccaneers are currently 10-3 this season. If the playoffs were to begin right now, the Buccaneers would be seeded third in the NFC behind Arizona (10-2) and Green Bay (10-3).

Celebrating his seventh title during a boat parade earlier this year in Tampa, Brady threw the Vince Lombardi Trophy from one vessel to another, completing another pass just a few miles away from where the Buccaneers defeated the Kansas City Chiefs three days earlier.

Thousands of fans attended the celebration of Tampa Bay winning Super Bowl LV. The Buccaneers became the first NFL team to play a Super Bowl in its home stadium, and then became the first to win one at home with their 31-9 win over the favored Kansas City squad.