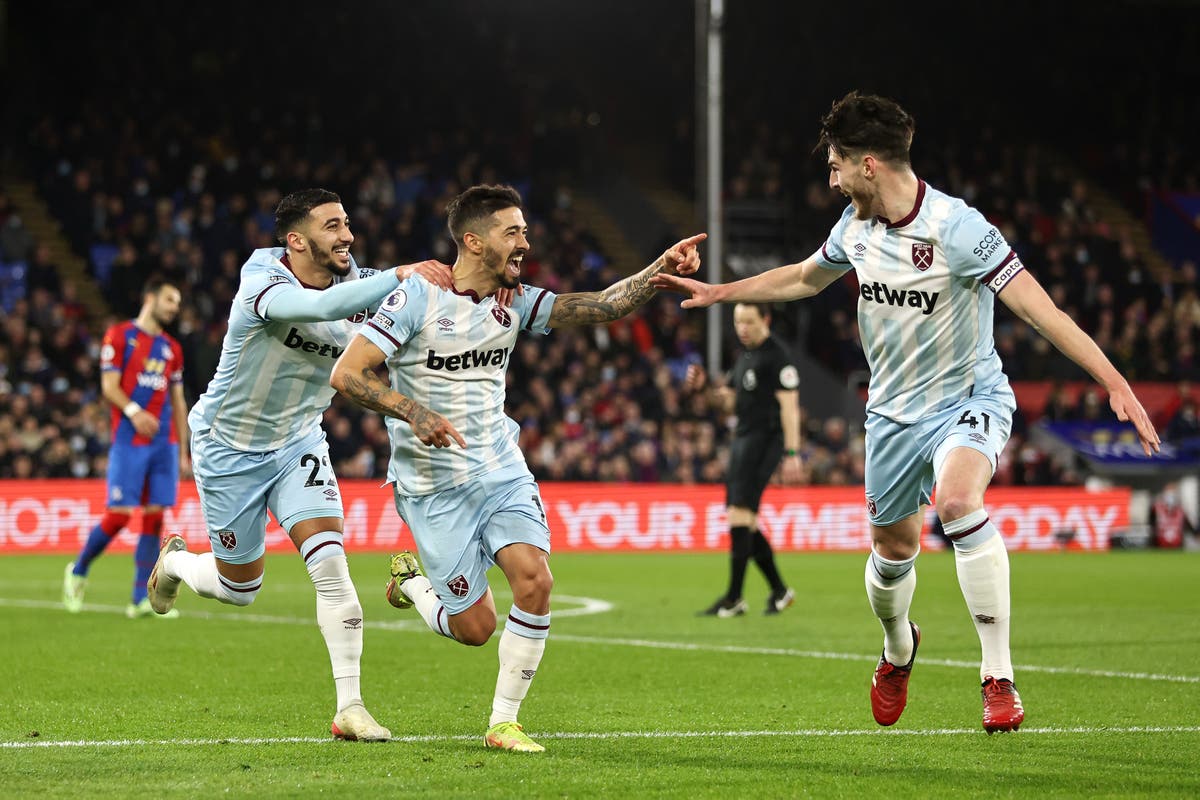 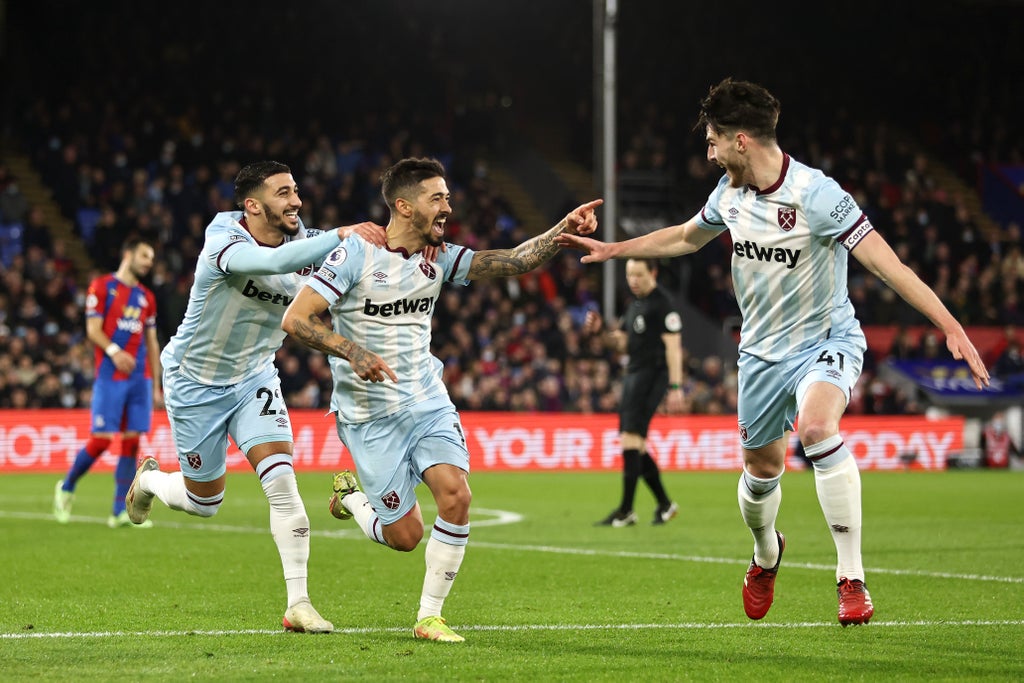 If you are still trying to come up with a New Year’s resolution, you could do a lot worse than committing to this particular rule: always watch West Ham. David Moyes’ side have emerged from their mid-season blip and are back playing with the buccaneering, attacking verve that fuelled their impressive start to the season and made them surprise contenders for the Premier League’s top four.

A 3-2 win at Crystal Palace, which should never have been that close, was the latest reminder of their credentials, a historic one at that, as well as the fact that they are always a must-watch. Victory at Selhurst Park was the first time West Ham had gone into half time in a Premier League away game with a three-goal lead, and in the end they were grateful for it. In scoring three here, it was the seventh time that had hit three or more goals in the Premier League this season. Only Manchester City, Chelsea and Liverpool have done the same.

The Hammers did so in style, too, with Said Benrahma‘s delicious cross to set up Michail Antonio’s opener and Manuel Lanzini’s quick feet and storming finish for their quickfire second two stunning moments of attacking quality. The two goals in the space of three minutes left Palace on the floor but Patrick Vieira’s side responded well and could have easily gone into the break having halved or even levelled the scores, only to see Lanzini’s penalty on the stroke of half-time put the contest beyond them.

It had already been a significant day in the top-four race, one defined by goals at the death. It did not seem as if West Ham would be involved in such drama, but after Odsonne Edouard and Michael Olise pulled late goals back, the Hammers were made to cling on to their three points. Jean-Philippe Mateta’s overhead kick that dipped narrowly wide in the dying moments would have capped a remarkable comeback for Palace, or collapse by West Ham. It was yet more last-gasp action in the Premier League.

Earlier in the day, the Gunners were denied a point against Manchester City as Rodri struck deep into stoppage time while Davinson Sanchez’s winner for Tottenham at Watford was even later. With Arsenal dropping points and Spurs gaining ground, it led to a tightening of the pack, even though there remains a discrepancy between those with points on the board and others with games in hand.

West Ham lie somewhere in between but they will be back up to speed at the conclusion of their rescheduled home fixture against Norwich on Wednesday, and came into this match with the incentive that two wins would move them back into the Champions League spots at the expense of Arsenal. The return of Declan Rice was therefore a boost for their trip to the south of London. The England international was superb yet again but he was far from the only standout performer in Moyes’ team.

The Hammers continue to do without key members of their starting back four. It showed as they almost blew their lead late on but it was also apparent from as early as kick-off. Their defensive fragilities were exposed in the opening minute as Jordan Ayew scampered around the outside of Ben Johnson and pulled the ball back to Jeffrey Schlupp, who struck the outside of the post with a bobbled strike from six yards. Schlupp was picked out again at the back post moments later, with Johnson forced into a block.

Despite those defensive concerns, West Ham found balance in their attack and it was in that department where they sparked into life. Johnson sent a ball deep towards the back post and Vladimir Coufal kept it alive. Antonio was sharp and forced Vicente Guaita into a save from close range, before the goalkeeper denied Benrahma’s header with an instinctive, outstretched arm as he tried to get back to his feet.

It would be the first of many flashes of danger, and there was nothing Guaita could do as Antonio threatened the six-yard box soon after, but the full credit had to go to the provider. West Ham’s opener was all down to the quality of the delivery from Benrahma. His whipped ball from the left was a delight and a nightmare for Palace’s Marc Ghehi to defend. It landed perfectly into Antonio’s path and the striker tucked a finish past Guaita for his eighth Premier League goal of the season.

Antonio greeted the opener with a celebration of trademark humour, with a swallow dive onto the turf being followed by Benrahma hopping onto his back. The pair were in sync during the routine, just as they were in scoring West Ham’s breakthrough. Indeed, no other duo in the Premier League have combined for more goals than their five so far this season.

If Antonio’s goal was inspired by the creation, the magic of West Ham’s second came from the finishing touches from Lanzini. Rice stole the ball in midfield and drove West Ham forward with a typically bursting run. He laid the ball onto Lanzini who finished in exquisite style, dispatching an unstoppable shot into the roof of the net after a flurry of touches and a blur of quick feet saw him dance past Joachim Andersen.

The Argentine is a player of patterns, a talented forward who seemingly only scores spectacular goals, recurringly against London opposition. His two strikes here now mean that over fifty percent of his Premier League goals have come in London derbies, and while his second was a rather more straightforward finish from the penalty spot, it maintained that remarkable record.

West Ham’s third was a brutal blow for Palace. Not only did it effectively kill off the game, after they had come so agonisingly close to cutting West Ham’s lead, but it was also so frustratingly preventable. Luka Milivojevic, back in for his just his eighth appearance of the season, was attempting to clear the danger inside the edge of the box when he created more by handling the ball with an awkward brush of his arm.

It was spotted by the VAR, who recommended Darren England to take a closer look, and Lanzini converted from the spot to condemn Palace to a half-time scoreline that they did not deserve on the balance of play. Vieira’s side had continued to threaten after hitting the post on their first attack of the game, with Edouard thundering a shot against the underside of the bar and Christian Benteke crashing a volley into the gloves of Lukasz Fabianski.

Vieira, after seeing his side have more shots, more possession and carry as much threat as the visitors, was understandably frustrated and let his feelings known to referee England as the sides made their way into the break. The Eagles manager would have been ever more frustrated, however, that it took until it was too late for his attacking changes to make a difference. In the considerable absence of Conor Gallagher and Wilfried Zaha, their two top scorers this season, it was the introduction of Olise which offered Palace some hope as he set up Edouard’s finish from close range before finding the net with an inswinging free-kick that beat Fabianski.

It set up a nervy finish for West Ham, one that was entirely preventable and few saw coming. They continue to be one of the Premier League’s great entertainers, but they can show why they are more than that with a win at home to Norwich on Wednesday to reclaim their top-four place.