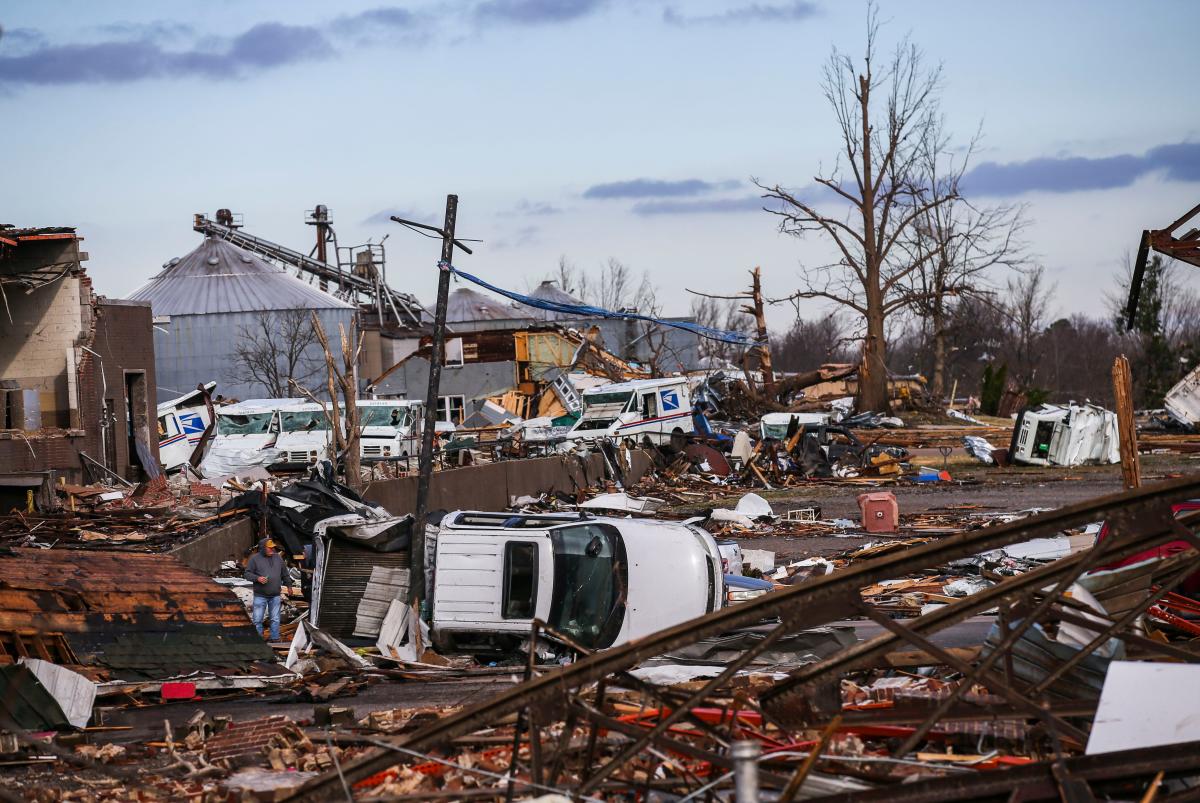 After a quartet of tornadoes left a devastating path of destruction in Kentucky from late Friday into early Saturday, many are wondering just how big and intense the storm was as it tore through the Bluegrass State.

The largest of the tornadoes leveled much of Mayfield in Graves County, also causing death and destruction in Dawson Springs and Bremen, among other communities.

How big was the Mayfield tornado?

The National Weather Service office in Paducah tweeted Saturday it would likely “take some time to make a determination” on the intensity and rating of the largest of the tornadoes.

But the weather service also said damage appeared to be consistent with an EF3 tornado capable of producing winds as strong as 206 mph, according to preliminary estimates.

Officials with the Paducah office reiterated at a Sunday press conference the Mayfield tornado was at least an EF3, but cautioned that rating could change as more information is gathered.

By 11:30 a.m. Sunday, the weather service’s Louisville office confirmed an EF3 tornado with wind speeds of 155 mph had hit the Bowling Green area, where it was still assessing damage.

For Taylor County, which had at least one death, the National Weather Service confirmed a preliminary report of an EF3 twister hitting near Saloma, an unincorporated community just north of Campbellsville and about 75 miles southeast of Louisville.

An EF1 tornado with roughly 90 mph winds was also reported in the Hart County community of Horse Cave, with western Spencer County as well as Breckinridge and Grayson counties seeing EF1 tornadoes, according to the preliminary surveys.

The Paducah office added that, according to an aerial assessment, the “historic long track tornado” was at least three-quarters of a mile wide in Kentucky as it went from southwest of Cayce in Fulton County to at least Beaver Dam in Ohio County.

For the sake of comparison, that’s a tornado as wide as 13 football fields stretched end to end.

“Surveys will continue for the long track tornado as well as other tracks for the next several days,” the National Weather Service office in Paducah said.

Gov. Andy Beshear has said the death toll will likely exceed 100 people in Kentucky, with the system of tornadoes and storms also resulting in deaths in Arkansas, Tennessee, Illinois and Missouri.

Path of ‘potentially historic’ tornado: Weekend storm may be longest ever in US history

See the path: A massive tornado ripped through Kentucky for more than 200 miles

The main tornado path originated in Arkansas and stretched roughly 223 miles before weakening in central Kentucky.

This latest system of tornadoes and storms in Kentucky could set a grim mark for deaths.

According to the National Weather Services, the deadliest tornado event in state history occurred in Jefferson County in 1890, when 76 people were killed.

In 1974, just over 70 in Kentucky were killed by a super outbreak of tornadoes across several states.

This story has been updated.

This article originally appeared on Louisville Courier Journal: Kentucky tornado category: How big, strong and wide was the storm?